Xi'an goes all out to ensure supplies amid lockdown 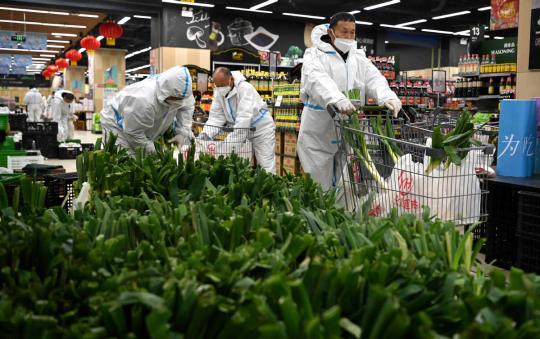 Supermarket workers and staff members of a COVID-19 prevention and control work group pick up vegetables and daily necessities at a supermarket on Tuesday in Xi'an, Shaanxi province, to distribute them for free to local residents. (Photo: Xinhua/Liu Xiao)

The authorities in Xi'an, Shaanxi province, are going all out to guarantee people's livelihoods and ensure adequate supplies of grains, meat, oil, vegetables, eggs and milk while maintaining efforts to contain the novel coronavirus.

Chen Jianfeng, deputy director of Xi'an's bureau of commerce, said on Wednesday his bureau has introduced effective measures to ensure smooth distribution of supplies after the city tightened control measures and imposed a lockdown to contain the COVID-19 outbreak.

"The bureau has tried to help and has coordinated logistics companies to strengthen distribution among local communities and housing estates," Chen said at a news conference. Efforts have also been stepped up to expand contact with vegetable and meat producers outside the city to ensure there is enough food for residents, he added.

A resident surnamed Zhang, who lives in Changyanbao, Yanta district, said people in his community have enough food at the moment.

"The prices are stable," said Zhang. "The situation here is calm, as residents maintain a distance when they stand in line to shop within the community."

Lyu Yongpeng, deputy director of Xi'an's health commission, said the city of 13 million people reported 151 new confirmed cases on Tuesday. At the end of Tuesday, the total number of confirmed cases in the city stood at 962 in the current outbreak.

Four patients have been discharged from the hospital, while six others remain hospitalized in serious but stable condition, the health commission said.

"Although the daily new confirmed cases detected in the city are still at a relatively high level, the mechanisms are running smoother with more targeted interventions, which have shown good results," he said.

Zhang said the city has launched four rounds of mass nucleic acid testing since Dec 21, and authorities are starting to see a reduction in the number of positive results.

Only 122 people tested positive in the fourth round of nucleic acid testing, compared with 400 in the third. The numbers of positive results were also high in the first two rounds of nucleic testing.