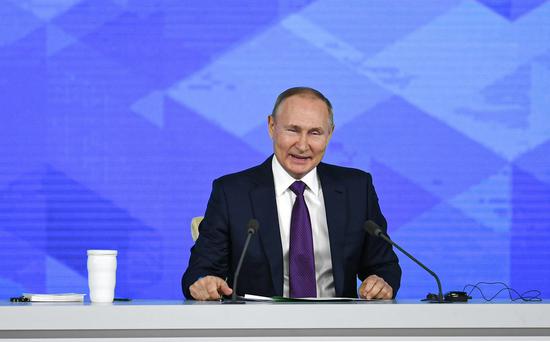 Russian President Vladimir Putin on Thursday highly praised Russia-China relations and voiced firm support for the two countries to intensify their cooperation in a broad range of spheres.

Russia and China have formed "an absolutely comprehensive partnership of a strategic nature, which has no precedent in history," Putin said during his annual press conference.

"Our annual trade turnover has been over 100 billion U.S. dollars, topping the pre-pandemic levels. China is our number one trade and economic partner," he said when answering a question raised by Xinhua.

The president noted that Russia is supplying fuel to China and they have established a partnership in the nuclear energy sector.

He pointed out to bilateral cooperation in high technologies, space exploration, civil aviation, education and defense, saying Russia and China are also cooperating in the field of security.

"We are developing cooperation between the two armed forces, including joint exercises, participation in the international army games, and joint patrolling at sea and in the air," he said.

"This intense daily work benefits both the Chinese and Russian people, and is a serious stabilizing factor in the international arena," Putin stressed.

Speaking of the Beijing 2022 Winter Olympics, the Russian leader said that it is "unacceptable and wrong" to launch a so-called "diplomatic boycott" of it.

"Sports, similarly to art, should unite people, not create problems between people and countries. When sports is deprived of this core value, it harms the entire international community," Putin said as he is expected to attend the opening ceremony of the Winter Olympics in February in Beijing.

He believes that those who attempt to hold China back with the so-call boycott are doomed to fail because China's economic development is unstoppable.

Putin held his 17th annual press conference in Moscow and answered more than 50 questions on a wide array of issues. The event attracted over 500 journalists and lasted for about four hours.