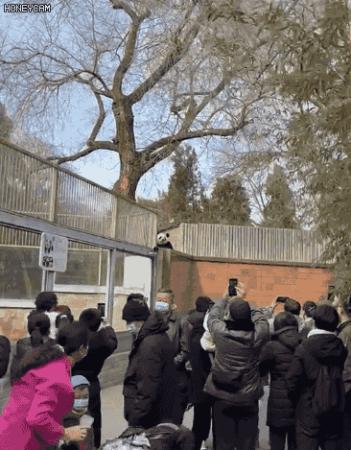 (Screenshot photo from the web)

Meng Lan, a giant panda in Beijing Zoo, went viral online for successfully breaking through the enclosure in front of the visitors, Guangming Daily reported.

"The giant panda walked to the fence, stepped on the decorations inside the enclosure… then held the fence with his front paws and flipped over," said a visitor who witnessed the whole scene.

At that very moment, the giant panda was captured "standing" on the top of a two-meter-high wall after scaling the fence but seemed to be unsure about where to go. His antics were filmed by people on the ground.

Fortunately, zoo workers arrived at the site very soon, helped evacuate the visitors and lured the panda back into his enclosure with food.

"He is a real kung fu panda," said a netizen.

The giant panda Meng Lan, a "celebrity" in the zoo, was born in July 2015 at the Chengdu Research Base of Giant Panda Breeding in Sichuan province. He was transferred to the Beijing Zoo in September 2017 and met the public later.

According to the official Weibo account of Beijing Zoo, Meng Lan was in the Panda Pavilion of the zoo. He played in the sports field for pandas and then climbed into the buffer zone, which is completely isolated from visitors.

The zoo said the sports field will be upgraded to prevent any future escapes of the pandas.