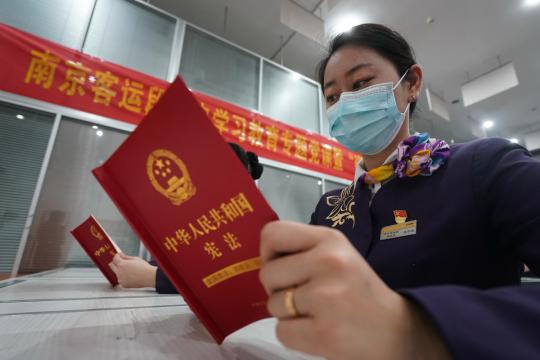 Xi Jinping, general secretary of the Communist Party of China Central Committee, has stressed the need to move forward with the development of a socialist legal system with Chinese characteristics and improve the nation's capacity and overall level in terms of the rule of law.

Xi made the remarks on Monday while presiding over a group study session of the Political Bureau of the CPC Central Committee－the Party's core leadership.

He highlighted the key role of the rule of law in securing fundamentals, stabilizing expectations and benefiting long-term interests, with China's great rejuvenation entering a crucial period and major changes unseen in a century gathering pace.

The nation must unwaveringly follow the socialist path of the rule of law with Chinese characteristics and focus on solving prominent issues in the legal field, he said.

He explained that China must lift its level of law-based governance in a bid to meet the growing public demand for democracy, rule of law, justice, security and a better environment, and to improve the people's living standards and strive for common prosperity.

It is imperative to maintain a sober mind and resolute position on key issues including upholding the Party's comprehensive leadership and ensuring that the people run the country, he said.

He added that the whole process of law-based governance must embody the people's interests, reflect their aspirations, protect their rights and enhance their well-being.

The general secretary called for stronger legislation in areas including national security, innovation in science and technology, public health, biological security, ecological civilization and risk prevention, adding that lawmaking in areas that matter to the people's well-being must be scaled up to ensure that the legal system can match the requirements placed on it by State governance and the people's growing demand for a better life.

The legal system, which guarantees that everybody is equal before the law, must be refined, and the unity, dignity and authority of the nation's legal system must be safeguarded, Xi said.

All violations of the Constitution and other laws must be investigated, and Party organizations and officials must take a clear-cut stand in supporting judicial organs and independently exercising their powers in accordance with the law, he said.

No one is allowed to use their power to intervene in the judicial process or the handling of cases, Xi added.

In furthering reform on the rule of law, the general secretary said the target is to ensure that the people can sense equality and justice in every law and system, every judicial decision and each case.

Xi called for accelerating the development of a socialist judicial system that is fair, efficient and authoritative, saying that more work must be done to improve the operating mechanism for law enforcement, judicial and supervisory powers.

The general secretary highlighted the need to strengthen lawmaking in sectors concerning foreign affairs, saying that the nation must take cooperation in law enforcement and the courts as a key issue in the development of bilateral relations.