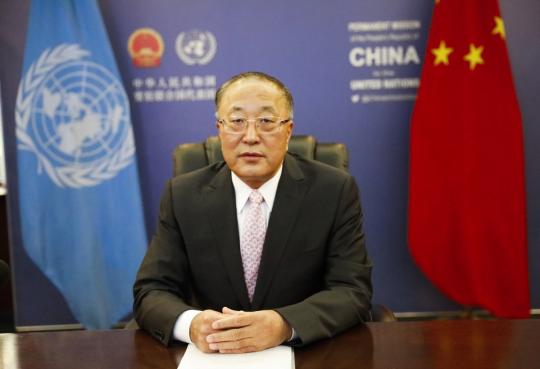 International envoys meeting at the United Nations have called for tougher measures to control the illicit trade in small arms, with the Chinese representative saying it was a serious phenomenon fueling conflict and transnational crime.

Zhang Jun, China's permanent representative to the UN and one of more than 50 speakers at an open session of the Security Council in November, said there was an urgent need to tackle the problem within a multinational framework.

The traditional focus of the arms control debate has been on the vast armories at the disposal of states. That has overshadowed the threat posed to people in many parts of the world by the proliferation of easily obtainable light weapons.

The trade has fueled drug wars, smuggling operations and sectarian insurgencies. According to Robin Geiss, the director of the UN Institute for Disarmament Research, who addressed the November session, arms trafficking "destabilizes communities and exacerbates situations of insecurity".

He said the trade fueled serious violations of international humanitarian and human rights laws, as well as violence against women and children.

Direct effects included deaths, injuries, displacement and psychological harm, while the proliferation of light weapons hindered access to health and education, humanitarian services and the protection of civilians, according to Geiss.

There are almost daily examples of the scourge of the illicit small arms trade, and they are not confined to countries or regions already associated with political or social instability.

In the normally sedate Netherlands, the emergence of a booming drug trade run by criminal gangs has seen a rise in killings by gunmen wielding automatic weapons.

In the midst of Europe's latest migrant crisis, a 23-year-old man was shot twice in the leg by a people smuggler after he refused to board a small boat that was headed across the English Channel.

In less stable regions, the UN has warned that the illicit flow of small arms is fostering violent extremism in parts of north and central Africa and posing a risk to its peacekeeping operations.

It has been estimated that 1 billion small arms are in circulation around the world, and that they were responsible for almost half the violent deaths between 2010 and 2015, or more than 200,000 each year.

Those figures were revealed almost two years ago by the UN's disarmament chief, Izumi Nakamitsu, who said at the time that availability of small arms and light weapons was a key factor in all of the issues addressed by the Security Council.

The council has been receiving regular briefings on the small arms problem for more than a decade. However, as daily headlines indicate, little action has been taken to make the problem go away.

The victims continue to range from African civilians displaced by endemic violence in parts of the continent to communities in Mexico and other parts of Latin America living under the shadow of armed drug cartels.

It was Mexico that decided to bring the issue to the UN in November as part of its current Security Council presidency.

In a related initiative, the Mexican government has brought a $10 billion lawsuit against major gun manufacturers in the United States for allegedly facilitating the trafficking of weapons to drug cartels.

The US export market is just one factor in the evolving small arms trade. UN monitors have found that in recent decades, the arms trade has shifted away from government-to-government deals toward a globalized market dominated by private interests.

These days, according to the UN's disarmament affairs office, traders, agents, brokers, shippers and financiers regularly combine their activities, making it difficult to distinguish between their small arms trading and related activities.

These brokers and dealers are described as exploiting legal loopholes, evading customs and airport controls and falsifying passports, end-user certificates, cargo papers and even flight schedules.

In the face of such tactics, many countries do not have specific laws covering arms brokering as part of their export controls.

Marcelo Ebrard Casaubon, Mexico's minister of foreign affairs, said at the UN session that governments and the private sector must work together to slow the trafficking of small arms and light weapons. Furthermore, he said, the private sector must self-regulate its distribution chains to ensure that such weapons do not end up in the wrong hands.

Zhang, China's representative to the UN, said that states bear primary responsibility for cracking down on the diversion of small arms. But he cautioned that the fight against illicit flows of such weapons was an uphill battle that would not be completed overnight.

The author is a senior media consultant for China Daily UK.