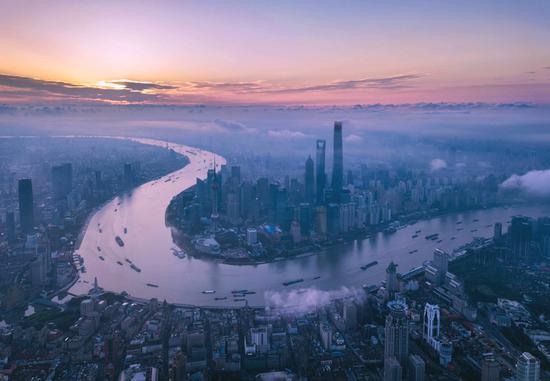 He was speaking at a public convention on China's latest economic trends, and opportunities there for Italian companies.

The event, entitled "China Watcher 2021," was hosted both on and offline by the Italy-China Foundation, the Italian Institute for International Political Studies (ISPI) and the industrial group Assolombarda. It featured the participation of analysts and corporate experts from various sectors, as well as Italy's Ambassador to China Luca Ferrari.

According to the experts at the convention, China's high-quality development, which includes green energy transition, wealth redistribution, an improved medical system and domestic consumption, means opportunities for Italian companies in sectors ranging from healthcare and renewable energy to agri-food and manufacturing.

"I think the energy transition is going to happen and is going to bring interesting opportunities," said Matteo Tanteri, CEO of Italian energy infrastructure company SNAM.

Filippo Fasulo, joint head of ISPI's geo-economics observatory, also listed renewable energy as one of the most promising sectors in the Chinese market for Italy, highlighting that "environmental improvement is crucial to China's social contract."

"In China, the healthcare system is no longer for the few but for everybody. It has increased demographic coverage and is improving. This will create an enormous market... furthermore it is an aging country with growing life expectancy, meaning a shift toward chronic illnesses, hence growing demand," said Canepa.

From the agri-food sector, Italian pork meat producer OPAS' export manager Luisa Baldi highlighted that Chinese high-end consumers' increasing demand for high-quality food means not only retail growth, but also a boost for short-supply-chain-companies, given the greater importance such consumers attach to food quality and traceability.

These companies have a more sustainable business pattern, which is relatively common in the Italian agri-food industry.

"China's definition of common prosperity and wealth redistribution is very interesting for OPAS in order to enter a market characterized by growing purchasing power, with consumers always more interested in wellness and healthy food," said Baldi.

"Italian companies have to intercept opportunities with great pragmatism, tapping the uniqueness of China's impressive digital ecosystem which is globally unparalleled," said Monti. Modern Chinese society is mainly cashless, he explained, since digital payments can cover almost all of consumers' spending needs.

According to Alessandro Zadro, head of the Italy-China Foundation's research center, Italian companies in China are still lagging behind in terms of digitalization, with just one in two companies positioned on Chinese e-commerce platforms.

However, Chinese consumers prefer online purchasing channels, and the country's online retail revenues are expected to exceed $3 trillion by 2024, according to the Foundation's latest study.

"We have to be in China not only to export but also to establish on-site production. China's policies offer great incentives for international companies as well. Eighteen of the world's 20 largest pharmaceutical companies have opened R&D centers in Shanghai," said Canepa, urging Italian companies to invest in innovative products in order to stay competitive in China.