The secret to a prosperous China-Africa relationship 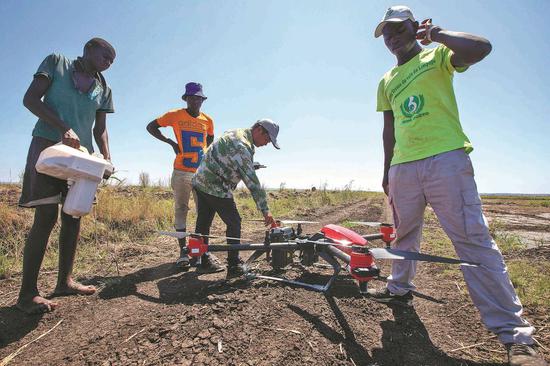 A Chinese agricultural expert (second from right) shows workers how to use a drone to spray herbicides over a rice farm in Mozambique. Thanks to China's technical support, yields at the Chinese-backed farm have increased significantly. (Photo: Xinhua/Lin Shanchuan)

China and Africa have stood together through times of adversity and success, setting a strong example for the building of a global community with a shared future.

The 8th Ministerial Conference of the Forum on China-Africa Cooperation (FOCAC) will convene despite disruptions caused by the COVID-19 pandemic, showing the great significance that Africa and China attach to furthering their ties, as well as a deep mutual trust that will create more opportunities for the two traditional partners to collaborate.

The FOCAC, since its inception in 2000, has become an important platform for collective dialogue and an effective mechanism for pragmatic cooperation that has profoundly benefitted the Chinese and African peoples and reshaped international cooperation with Africa.

After years of dedicated efforts, the tree of China-Africa cooperation has flourished -- it is tall and strong, and cannot be shaken by any force. The China-Africa friendship is now in its prime.

The secret to fruitful China-Africa cooperation has been revealed by a white paper, titled "China and Africa in the New Era: A Partnership of Equals," released by China's State Council Information Office on Friday.

The China-Africa friendship, according to the paper, has been embodied by mutual political trust, rapidly expanding economic cooperation, growing social development cooperation, people-to-people and cultural exchanges, and steadily expanding cooperation on peace and security.

Economy-wise, statistics show China has been Africa's largest trading partner for the 12 years since 2009. China-Africa trade accounted for more than 21 percent of Africa's total external trade in 2020. China has increased its imports of non-resource products, and offered zero-tariff treatment to 97 percent of taxable items by the 33 least-developed countries in Africa.

By the end of 2020, direct investment by Chinese companies in Africa had surpassed 43 billion U.S. dollars. The over 3,500 Chinese companies across the continent have directly and indirectly created millions of jobs while more than 80 percent of their employees are locals.

When it comes to infrastructure, to say that Chinese companies' involvement in infrastructure development is profoundly changing Africa's landscape is no exaggeration. To date, almost all African countries with diplomatic ties with China have already signed agreements on cooperation under the Belt and Road Initiative. Projects implemented by Chinese companies accounted for 31.4 percent of all infrastructure projects in Africa in 2020.

Since the founding of FOCAC, Chinese companies have utilized various funds to help African countries build and upgrade more than 10,000 km of railways, nearly 100,000 km of highways, nearly 1,000 bridges and 100 ports, and 66,000 km of power transmission and distribution. They have also helped build an installed power-generating capacity of 120 million kW, a communications backbone network of 150,000 km and a network service covering nearly 700 million user terminals, according to the white paper.

Mutual support is prevalent in the new era of China-Africa cooperation. From the devastating earthquake in southwest China's Sichuan Province in 2008 to cyclone Idai that swept across Zimbabwe, Mozambique, and Malawi in 2019, from the Ebola virus outbreak in West Africa in 2014 to the ongoing COVID-19 pandemic, China and Africa have always stood alongside each other in trying times.

During the toughest times in China's fight against the COVID-19 epidemic, African countries and regional organizations such as the African Union provided strong support to China. After COVID-19 struck Africa, China immediately offered humanitarian assistance, including urgently-needed medical supplies and vaccines. Earlier this week, the main building of the Chinese-funded headquarters for the Africa Centers for Disease Control and Prevention was structurally complete.

At the upcoming conference, China and Africa are looking forward to in-depth discussions on post-pandemic economic recovery, health, infrastructure development and other issues.

The two sides are also expected to nurture new growth drivers such as e-commerce, building 5G networks, and greening the economy with a view to promoting high-quality and sustainable common development.

Looking to the future, the space for mutually beneficial cooperation will surely expand as the China-Africa community with a shared future grows ever stronger.