CPC the architect of China's miracles 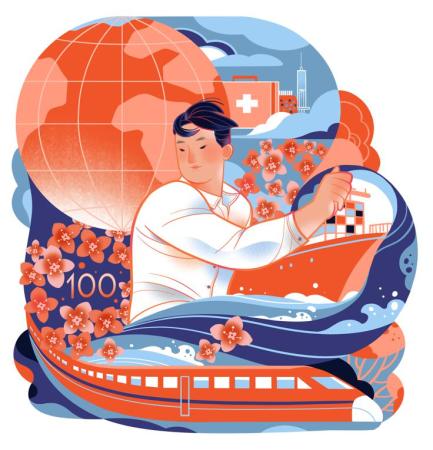 The Sixth Plenary Session of the 19th Communist Party of China Central Committee, held from Nov 8 to 11, passed a resolution on the Party's major achievements and historical experience in the past century. The resolution comes at a critical juncture, and charts the path of the country's future.

The CPC, which was founded in July 1921, has now grown into a party of more than 95 million members and over 4.8 million branches around the country. It is the world's largest ruling party with a history of 100 years.

Under the CPC's leadership, the Chinese people drove imperialist powers from the country, overthrew the feudal warlords, and established the People's Republic. Throughout its 100-year history, the CPC has been true to its original mission of seeking happiness for the Chinese people and pursuing national rejuvenation. Just as State Councilor and Foreign minister Wang Yi has said, the relationship between the Party and the Chinese people is as close as that between "fish and water" and "soil and seed".

The leaders of China who assumed office after the founding of New China in 1949 formulated policies for the well-being of the Chinese people. And an important factor that has enabled the CPC to lead China to achieve successes one after another is that it always insists on the sinicization of Marxism.

Mao Zedong Thought combined Marxism-Leninism with Chinese revolutions and socialist construction. And the theories of socialism with Chinese characteristics, including Deng Xiaoping Theory, the Important Thought of Three Represents, and Scientific Outlook on Development, achieved a new breakthrough in adapting Marxism to the Chinese context.

China has entered a new era, and Xi Jinping Thought on Socialism with Chinese Characteristics for a New Era embodies the best of the Chinese culture and ethos in modern times and represents a new breakthrough in adapting Marxism to the Chinese context.

The CPC launched the first five-year plan in 1953 with the aim of boosting China's economic and social development, and eradicating poverty. And after becoming general secretary of the CPC Central Committee at the 18th CPC National Congress in 2012, Xi Jinping accelerated the poverty eradication campaign.

More important, President Xi Jinping has repeatedly called on all Party and government officials to put the people first, serve them wholeheartedly, and work hard to improve their lives and livelihoods.

Thanks to the Party's astute and able leadership, China eradicated absolute poverty at the end of last year, lifting about 800 million people out of poverty since the launch of reform and opening-up a little more than 40 years ago. Which is unprecedented in world history.

The government has also successfully relocated poor people to well-connected areas where they will have a much better chance of improving their lives. And the building of roads, railways, especially high-speed railways, has played an important role in developing rural areas. In particular, by connecting even remote villages, the officials have opened up many development paths. For example, residents in the Xinjiang Uygur autonomous region make naan, or flat bread, at home and sell them to markets in Beijing and Shanghai using e-commerce platforms, thanks to the extensive internet coverage in China. Also, by opening up remote areas to tourists, the authorities have created a new channel for residents to increase their incomes.

The year 2020 marks a historic moment for China, because the Party fulfilled its first centenary goal of building a moderately prosperous society in all respects.

It is to the credit of the Party's leadership that China has achieved rapid economic development over the past four decades to become the second-largest economy in the world. China also has the largest foreign exchange reserves in the world, and has been contributing about 30 percent to global economic growth for the past many years.

I have visited 20 provinces of China and seen the economic, social and cultural transition first hand. I have also met and talked with youths in different Chinese cities, and noticed their enthusiasm to excel in their chosen fields.

In January 2019, China made history by becoming the first country to land a spacecraft, Chang'e 4, on the far side of the moon. And in December 2020, Chang'e 5 landed on and gathered rocks from the moon. These are some of the most remarkable achievements of China in the field of science and technology.

As a result of all these accomplishments, people around the world have begun to acknowledge the importance of the CPC's efforts to build a community with a shared future for mankind, for which China is ready to work with the international community. China also wants to build an open, inclusive, clean and beautiful world where everlasting peace, security and common prosperity are the norms.

China proposed the Belt and Road Initiative in 2013 to improve connectivity across countries and continents so people around the world can share the fruits of global development. Not only China but many other countries have benefited from this initiative, as it has facilitated the construction or improvement of infrastructure facilities, especially in Central Asia, South Asia, the Middle East and Africa. And to further promote the development of other countries, China has helped establish the Asian Infrastructure Investment Bank, BRICS New Development Bank and the Silk Road Fund.

Besides, in the face of the COVID-19 pandemic, China, under the Party's leadership, implemented strict and effective prevention and control measures, which not only helped contain the pandemic but also facilitated the resumption of economic activity. In fact, we were amazed by the speed at which China built two new hospitals in Wuhan to help fight the pandemic.

Besides, China was the first country to largely contain the COVID-19 pandemic, minimizing the threat to people's lives and health, which in turn has played a key role in the global economic recovery. All these testify to the party's strength and vision.

In the spirit of international humanitarianism, China has fought shoulder to shoulder with the rest of the world against the pandemic. It has supplied medical equipment and medicines, including the all important COVID-19 vaccines, to more than 150 countries and 13 international organizations.

The next five-year plan will be the first after China achieved its first centenary goal. So now the Party will pursue the second centenary goal of developing China into a great modern socialist country that is prosperous, strong, democratic, culturally advanced, harmonious, and beautiful by 2050 (2049 being the centenary of the founding of the People's Republic), and continue to serve the Chinese people and boost the global economy.

The author is president of Sri Lanka China Society.