-- Like the woolen carpet makers in Afghanistan, businessmen from Syria, a country that has also suffered war and turmoil in recent years, are also exploring the Chinese market. The Dakka Kadima factory in Syria, which has a history of nearly 100 years, has found its market in China after participating in the CIIE.

-- The fourth CIIE attracted nearly 3,000 companies from 127 countries and regions, including 33 least developed countries. The annual fair has become a significant platform for foreign companies to boost exports to the massive Chinese market.

It was the second time he attended the expo, the world's first import-themed national fair in Shanghai. He brought over 70 carpets to the booth for sale and promotion.

"A lot of the logistics stopped, and we shipped the goods to a third country and then to China," said Faiz, who stocked about 3 tonnes of commodities for the expo, which opened last Thursday and will last until Wednesday.

After he first showcased the woolen carpets at the expo last year, the pieces raised interest among Chinese customers, and the orders he received brought income to Afghan families. 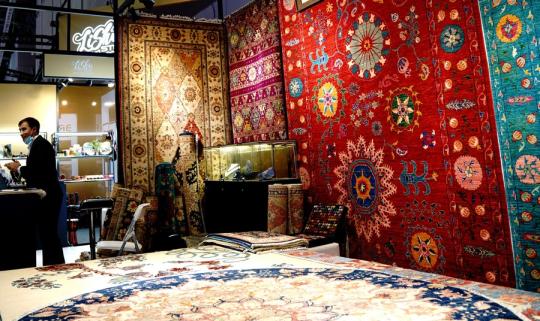 The carpets come from more than a dozen towns in central and northern Afghanistan. It takes four people eight months to complete the weaving of each large one. And the sales of a large wool carpet can support a regular family for nearly a year in this war-torn country.

For these reasons, Faiz continues his participation in the expo despite difficulties. "When I bring the carpets here, I also bring the hope of people in my hometown with me," said Faiz.

To attract Chinese customers, some carpets also have Chinese cultural elements, such as the design of Chinese peony flowers.