"The carpets are really of high quality and in line with our Chinese aesthetics," said a female Chinese customer, who came to know the booth through media reports and came to buy two pieces, one for herself and one for her friend.

Like the woolen carpet makers in Afghanistan, businessmen from Syria, a country that has also suffered war and turmoil in recent years, are also exploring the Chinese market through the CIIE.

Not far from the Afghan carpet booth, Aleppo soaps from Syria are neatly placed. Syrians bring this traditional commodity into China with the help of the CIIE's platform.

The centuries-old soap industry in the country was hit hard by the war, and many ancient soap shops were bombed. 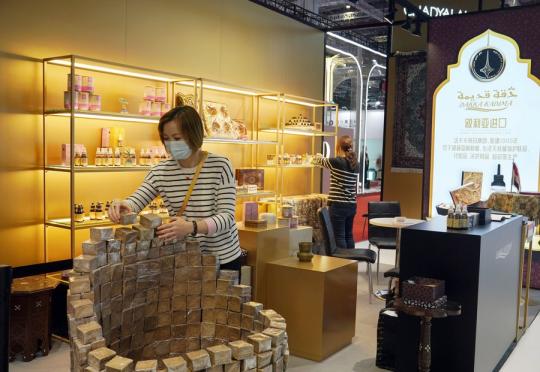 Fortunately, the Dakka Kadima factory, which has a history of nearly 100 years, has found its market in China.

"After participating in the second CIIE, our washing products, such as the soaps, quickly entered China's shopping malls, supermarkets, and e-commerce platforms," said Tarek Alshayb, head of Dakka Kadima China. At present, the sales volume in the China accounts for 25 percent of the company's total sales in the overseas market.

Rose essential oil from Damascus is also present at the import expo. Roula Ali-Adeeb, founder of the BioCham company, recalled her difficult years: a shipment of goods worth 200,000 euros was affected due to sanctions, and militants broke into the factory and kidnapped employees.