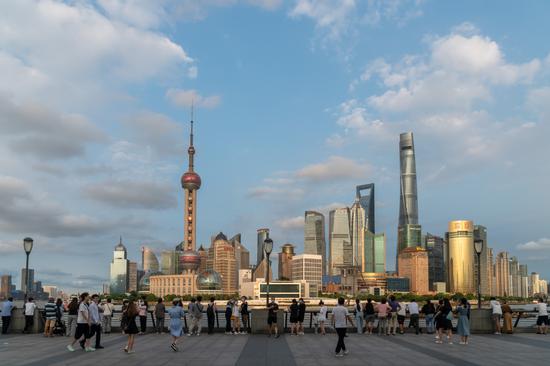 Pudong New Area in the eastern part of Shanghai should become more prolific in international trade and shipping businesses during the 14th Five-Year Plan (2021-25) period so that the area can better connect domestic and international circulation, according to two sets of plans released on Thursday.

Pudong's overall trade structure should be further optimized by 2025, while more international leading trade companies and institutions should be attracted to set up a presence in the area, according to plans which aim to strengthen the area's trade capacity during the 14th Five-Year Plan (2021-25) period.

Specifically, the plan stipulates that Pudong should account for more than 60 percent of Shanghai's total value of trade in goods and over 55 percent of the city's import and export value for trade in services by 2025. The annual income of offshore trade should also reach 400 billion yuan ($62.5 billion) that year, according to the plan.

Pudong is currently planning to nurture and introduce 150 regional headquarters of multinational companies and domestic industry leaders within five years. The plan stated that 10 large e-commerce companies, each with an annual gross merchandise value exceeding 10 billion yuan, should be based in Pudong by 2025.

Meanwhile, four commodities trading platforms with the respective annual trading values topping over 100 billion yuan should become operational in Pudong by that year.

"The ultimate goal is to build Pudong into a core area for international trade which is closer to the rest of the world and a place that celebrates a higher degree of opening-up. More supporting industries and facilities should be built here to provider better experiences to market entities," said Lu Qixing, deputy director of the Pudong commission of commerce.

Pudong should also account for 90 percent of Shanghai's total annual container throughput in the next few years, with the volume reaching 42 million TEUs in 2025. The total asset value of finance leasing for airplanes and ships should amount to 440 billion yuan, according to the plan.