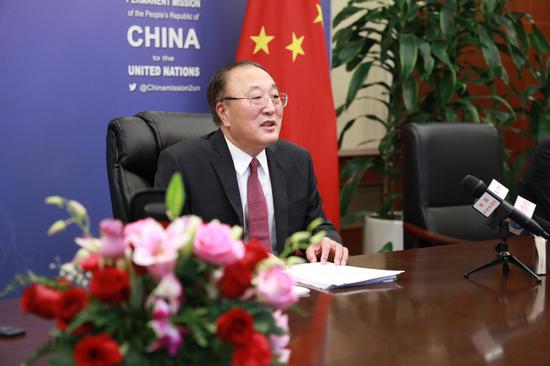 China's ambassador to the United Nations on Thursday bluntly told the United States, France and a few other Western countries that they are "in no position to make choices for the Chinese people, let alone lecture China", while more than 80 countries expressed their support for China's sovereignty.

Cuba delivered a joint statement on behalf of 62 countries in support of China, stressing that respecting sovereignty, independence and territorial integrity of states, and non-interference in internal affairs of such states are basic norms of international relations.

The statement stressed that issues pertaining to Hong Kong, the Xinjiang autonomous region and Tibet are China's internal affairs that brook no interference by any external forces. It also supported China's implementation of "one country, two systems" in the Hong Kong Special Administrative Region.

The joint statement also called upon all parties to respect the right of the people of each state to choose independently their path for human rights development in accordance with their national conditions and treat all human rights with the same emphasis. It opposed politicization of human rights, double standards and unfounded allegations against China out of political motivation and based on disinformation.

Kuwait made a joint statement in support of China on behalf of three Gulf states, stressing the objective, constructive and non-political principles of human rights issues; called upon all states to follow the purposes and principles of the UN Charter and the Universal Declaration of Human Rights; and to respect national sovereignty and non-interference in internal affairs.

During Thursday's meeting, more than 20 countries made statements in support of China, spoke highly of China's achievements in the development of human rights, and called on all countries to uphold multilateralism and solidarity and to promote and protect human rights through dialogue and cooperation.

During the meeting and a press conference held later on Thursday, Zhang Jun, China's permanent representative to the UN, said that the U.S. and a few other countries have once again abused the Third Committee platform "to launch groundless accusations against China, spread political viruses and disinformation, and poison the atmosphere of cooperation, which China resolutely opposes and strongly rejects".

"To the U.S. and a few other countries, let me say this: Your trite lies are totally unfounded. Xinjiang enjoys stability, development and prosperity, and the Chinese people's life is getting better day by day. The Chinese people are satisfied with and proud of such achievements, and those achievements are widely recognized and praised by people around the world," the Chinese envoy said.

The happy lives and smiles of the Chinese people are the best manifestation of China's human rights situation, he said. Those Western countries may fool themselves, but they "cannot fool the world", he said.

The envoy stressed that China's progress is "unstoppable". No one can deprive the Chinese people of their right to lead a happy life. "It's time to wake up! Your days of bullying and oppressing developing countries are long gone," he said.

"To the U.S. and a few other countries: Your desperate attempts to cover up your own terrible human rights record will not work," said Zhang. "The U.S. conducted genocide against the American Indians. It suppressed its own people to the point they yell "I can't breathe.'"

"It ignored the deaths of over 700,000 nationals due to the pandemic. And it stained its hands with the blood of hundreds of thousands of Muslim civilians in the Middle East and Central Asia. The list goes on. Human rights are not your cover up. Blaming other countries will not wipe off your own misdeeds, but only reveal your evil and hypocrisy.

"To the U.S. and a few other countries: Your attempts to get rid of those who hold different views in the name of democracy will only end in vain," Zhang emphasized.

He said whether a country is democratic or not should be decided by its own people, not by some foreign individuals, let alone countries like the U.S..

"To France and other followers of the U.S.: What you are doing is submitting your independence and autonomy and serving as the henchmen of the U.S., as if you can gain superiority by acting at the beck and call of the superpower. But the truth is, you are giving up your own dignity and will win no respect from others," he said.

He pointed out that more than 80 countries have voiced support of China, opposing interference in other countries' internal affairs in the name of human rights, and calling for following the UN Charter.

Zhang said that history and reality have proven repeatedly that the United States is on the opposite side of the international community.

Respecting and protecting human rights have been written into China's Constitution and are general practices in Chinese society, said Zhang. "Under the leadership of the Communist Party of China, the Chinese people of all ethnic groups have made tireless efforts and realized the first centenary goal. We have built China into a moderately prosperous society in all respects.

"China sticks to its human rights path with distinctive Chinese features that suits our national conditions and delivered better lives to the Chinese people," Zhang continued. "What we have achieved shows that this is a correct path with a bright future."