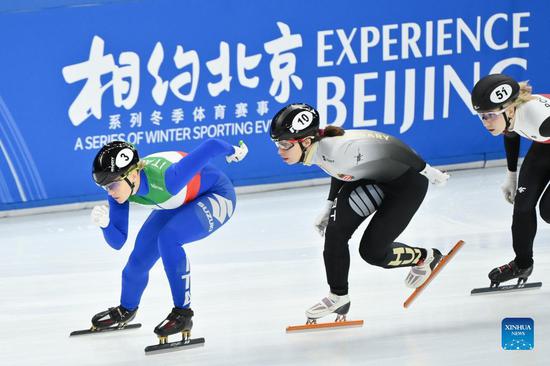 Serving as one of the "Experience Beijing" test events and a qualifier for the upcoming Beijing 2022 Olympic Winter Games, the competition includes 248 athletes.

Chinese Olympic champion Wu Dajing and his 11 teammates were named to compete in the first two events of the ISU World Cup.

In the men's 1,500m, Ren Ziwei, An Kai and Sun Long all qualified for the quarterfinals.

Without making any international appearances in two years, Ren admitted that he had to get used to the sense of competing.

"My body was a bit stiff in the beginning," said the World Cup winner. "But as I kept skating, I found the best conditions. I'm aiming for medals in the next few days."

"We are well-prepared for the World Cup. My body feels good, the competition feels good too," said An, the FISU World University Games men's 1,500m champion. "The ice is really nice and fast."

Beating the world record in the event at the "Experience Beijing" testing programs this April, Sun said he had become more confident. "The result helped us further prepare for the Beijing 2022 Winter Games. We want even better results."

Podium material Hwang Dae-heon was penalized after he made contact with Liu Shaolin Sandor of Hungary during the race. Liu also praised the ice in the interview, adding "I hope the ice will remain at this high level during the Beijing Winter Olympics."

In the women's 1,500m quarterfinals, Chinese athletes Zhang Yuting and Han Yutong both made it to the next round as group leaders, while Xu Aili failed to become the fastest group-third and got eliminated.

Star skaters Choi Min-jeong of South Korea, Courtney Sarault of Canada and Italian Arianna Fontana all booked their spots in the semis, while Olympic champion Suzanne Schulting of the Netherlands was knocked out.

When being asked about the COVID-19 countermeasures, Schulting said that "everything is pretty good organized. I think China did a really great job and I feel really safe and I'm happy to be here."

In the men's and women's 500m heats, all six Chinese athletes qualified for the quarterfinals, with Wu clocking the fastest time of the day with 40.014 seconds.

In the newly added mixed 2,000m relay, the world record was set three times in just half an hour, with South Korea setting a world record of two minutes and 38.451 seconds and the Netherlands clocking 2:38.094 next.

Team China, composed of Fan Kexin, Wu Chunyu, Ren Ziwei and Wu Dajing, went on the rink in the last group and finished with a time of 2:37.747 to fresh the world record for the third time of the night.

Friday will see the men's and women's 1,000m and relay races.