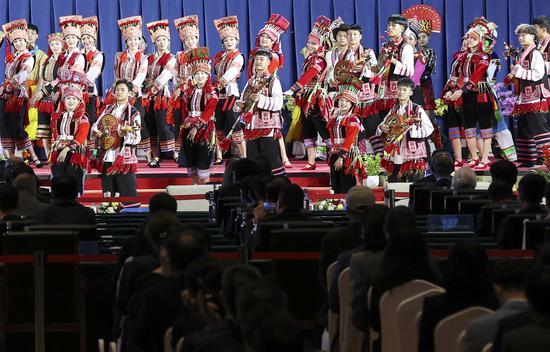 Musicians and dancers perform at the opening ceremony of the 15th meeting of the Conference of the Parties to the Convention on Biological Diversity in Kunming, capital of Yunnan province. (Photo: China Daily/Feng Yongbin)

The five-day first phase of the COP 15 United Nations biodiversity conference that concluded on Friday met all expectations and was a milestone, international officials said.

The 15th meeting of the Conference of the Parties to the Convention on Biological Diversity, known as COP 15, held in Kunming, Yunnan province, was a success and met all expectations, said Elizabeth Maruma Mrema, the convention's executive secretary.

"The fact that we were able to hold COP 15 after postponement twice was a success in itself," she said.

At COP 15, President Xi Jinping announced the establishment of a biodiversity fund with an initial investment of 1.5 billion yuan ($233 million) to support developing countries in their implementation of the post-2020 global biodiversity framework.

The framework, to be discussed at the second phase of the meeting next year, will guide actions worldwide through 2030 to preserve and protect nature and its essential services to people.

"China takes the leadership," Mrema said. "The meeting gives China an opportunity to share with the rest of the world what it has done on conservation and protection of biodiversity."

Maria Helena Semedo, deputy director-general of the UN's Food and Agriculture Organization, told Xinhua News Agency that the meeting was a milestone.

She said it had strengthened global opportunities for biodiversity governance as the planet faces crises of biodiversity loss, climate change and pollution.

The meeting responded to global challenges, including food insecurity, poverty and inequality caused by the degradation of biodiversity and ecosystems.

Biodiversity is the backbone of food security, productivity, nutrition and livelihoods, Semedo said, adding that protecting it will help achieve sustainable development goals.

She added that China's complex terrain and diverse climate render it a unique ecosystem in terms of species resources and genetic diversity.

As one of the countries with the richest biodiversity in the world, China has a deep understanding of biodiversity, reflected in Chinese traditional culture, she said, citing an old Chinese saying that humans are a part of nature.

She said she hoped that China will constantly support the global agricultural cultural heritage system, share its experience and lessons in protecting biodiversity, respond to climate crises, and manage natural resources through South-South cooperation.