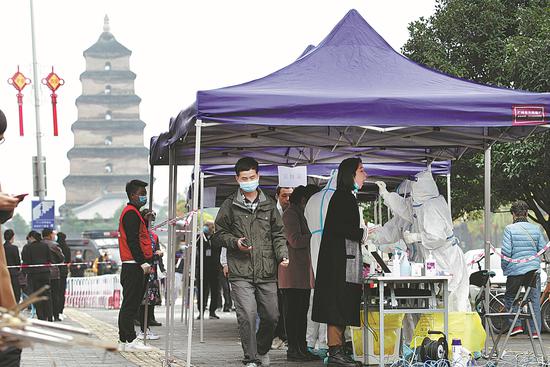 Nucleic acid tests are conducted in Xi'an, Shaanxi province, on Wednesday. The authorities have strengthened prevention and control measures to halt the spread of the virus. (Photo: China Daily/Ruan Banhui)

The recent COVID-19 clusters in at least seven provinces and autonomous regions, which are suspected to be related to a tour group and imported cases, have highlighted the urgent need to curb a winter outbreak, experts said.

Seventeen new locally transmitted COVID-19 cases were reported on the Chinese mainland on Tuesday, according to the National Health Commission. Of the new cases, eight were reported in the Inner Mongolia autonomous region, four in Gansu province, one each in the provinces of Guizhou, Yunnan, Shaanxi and in the Ningxia Hui autonomous region and Beijing.

Chen Zhanyun, Party secretary of the banner, said during an interview with China Central Television on Tuesday night that it's difficult to bring experts, as well as goods and materials, to the area because of its remote location.

He highlighted the measures taken to control the potential risks of imported infection at the land port area. From 7 am on Monday, Ejine Banner shut down Ceke Port, the third-largest land port in Inner Mongolia, for 48 hours.

"After the outbreak, we also conducted nucleic acid tests on everyone in the port, and suspended traffic connecting the port with the banner," Chen said.

He said they will try their best to control the spread of infections in the region and the risks of importing infections from overseas.

Wang Luyao, 35, a physician at a kindergarten in Ejine Banner, said she has stayed at home since Monday with her sons age 10 and 6. "My husband is a policeman, he has been away from home since the outbreak of the epidemic," she said. "Others like community workers and doctors are all working hard to control the epidemic. I have confidence that it will be contained soon."

A tour group of eight people that recently visited Ejine Banner and Lanzhou and Jiayuguan in Gansu have all tested positive for COVID-19.The majority of the cases were confirmed when the tour group members were tested in Xi'an, Shaanxi province, on Saturday.

Yang Zhanqiu, a professor at the Institute of Medical Virology at Wuhan University School of Basic Medical Sciences, said some of the current infections appear to be associated with the tour group. However, considering the incubation period, the tour group members, who were mainly from Shanghai, may have been infected before they started traveling in the northwestern region, he said in an interview with Jimu News. More cases might occur in the near future as the virus is more active in winter, he added.

As China has largely had domestic infections under control for a long time, it's likely that the original source of the outbreaks is from outside the country, Wang Guangfa, a respiratory diseases expert at Peking University First Hospital, said in an interview with the Global Times on Tuesday. However, scant details are known about the current outbreak, such as where it came from and which Chinese city was hit first.

The prospect of more winter infections has also been drawing attention. Yin Hong, Party secretary of Gansu, said on Tuesday night that the province will accelerate source tracing of the virus and nucleic acid testing. "Epidemic control and prevention is the most urgent task at present," Yin said.