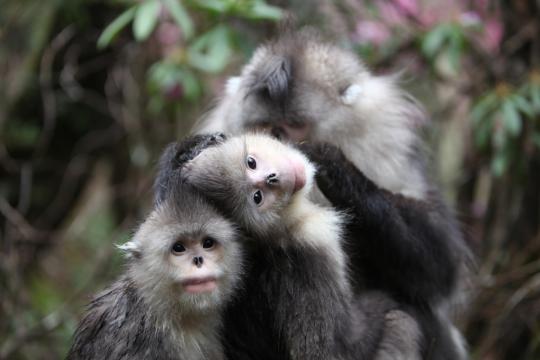 Yunnan snub-nosed monkeys cling to each other at the Baima Snow Mountain Nature Reserve. （Photo by XIAO LIN/for China Daily）

China will work with the international community to contribute its experiences on environmental protection and call for joint efforts from countries around the world to tackle climate change and other environmental challenges through the promotion of a green development model.

At the Erhai Forum that kicked off in Dali, Yunnan province, on Saturday, more than 300 participants from China and abroad shared their ideas on building an eco-friendly world.

As a country with rich biodiversity resources, China has made remarkable achievements in biodiversity conservation thanks to efforts from the whole of society.

China has accounted for up to 10 percent of the new plant varieties identified worldwide in the past decade and has contributed about 25 percent of global vegetation growth in that time, more than any other country, according to a white paper released by the State Council, China's Cabinet, on Friday.

China's forest coverage and forest reserves have grown continuously for the past 30 years, during which time the country has realized the world's largest growth in forest resources.

Amid the COVID-19 pandemic, the international community should pool its wisdom and foster exchanges and cooperation to shape synergy in sustainable development and eventually create a better world for all, Du said.

In keeping with the philosophy of building a community with a shared future for mankind, China will join hands with the international community to contribute to global environmental protection, Wan Gang, a vice-chairman of the 13th National Committee of the Chinese People's Political Consultative Conference and president of the China Association for Science and Technology, told the forum via video link.

"China has always pursued green development and pushed for reforms in energy consumption, energy supply, energy technologies and the energy system for better international cooperation at all levels," he said.

Wan said China will fulfill its commitment to international society and maintain efforts to see carbon emissions peak and achieve carbon neutrality in the automotive industry at an early date.

He said more than 1,000 fuel-cell vehicles will be put into service by the end of next year, adding that green power and hydrogen energy will play an important role in ensuring energy security at the 2022 Winter Olympics.

As an important supporting event for the 15th meeting of the Conference of the Parties to the United Nations Convention on Biological Diversity, which kicks off on Monday in Kunming, Yunnan's provincial capital, the Erhai Forum aims to provide Chinese solutions and share the nation's experiences to boost efforts toward global ecological progress.

"As an active participant in international cooperation on environmental protection and the battle against climate change, China has proactively approved and implemented key international UN conventions," said Guo Weimin, president of the China Public Relations Association.

Home to more than half of China's higher plant species and more than 6,000 vertebrate animals, Yunnan has set up multiple initiatives to protect biodiversity in past decades.

More than 120 rescue and protection projects targeting plant species with extremely small populations have been implemented in Yunnan in the past five years, with 30 protection zones marked out, Guo said.

"Through these projects and zones, Yunnan is effectively preserving and restoring rare and priority flora," he said.