Passing the test with flying colors 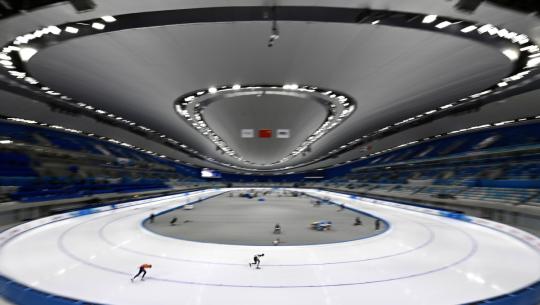 The final series of tests for the Beijing Winter Olympics got off to a flying start last week, with smooth action on the ice boding well for safe and exciting Games next year.

Highlighted by world-class ice quality and strict pandemic-control protocols, the operation of Beijing 2022's first international test event impressed athletes at the newly built National Speed Skating Oval, while offering the world a glimpse of what next year's Olympics will have in store.

The three-day test event, officially known as the China Open, featured skaters from South Korea, the Netherlands and the host, with all heaping praise on the new venue, which was built on the field hockey ground used for the 2008 Summer Olympics.

"This is a really beautiful venue, where I've had a very nice and comfortable experience," Dutch skater Sophie Kraaijeveld said through an interpreter on Friday after clocking 4:25.32 to win the women's 3,000m, the first official international race held at the oval since its completion in December.

As the winner of the women's mass start event at last year's Winter Youth Olympics in Switzerland, Yang admitted racing on the track has given her extra motivation to return to the podium at next year's Olympics, which open on Feb 4.

"The venue looks amazing and the facilities are all world class," Yang said during Friday's virtual mixed-zone interview, which took place via teleconference call to avoid physical contact between athletes and journalists.

"It's really an honor to be able to be part of this venue's world debut. The ice quality was nice. My experience was quite good.

"There's no doubt that our goal for the Beijing Winter Olympics will be trying to have our red flag raised and the national anthem played here next year."

The Netherlands is by far the most successful Olympic speed skating nation, having won 42 gold medals in the sport since the inaugural Winter Games in 1924.

Having conquered oval-shaped tracks all around the world, the Dutch skaters were still left in awe of the Beijing 2022 venue.

"When I am in this new stadium, I am just looking at how beautiful it is," said Dutch Youth Olympic champion Isabel Grevelt, who won the 500m on Friday and the 1,000m on Saturday.

"It's very modern and I really like the way it was done in white and blue. The ice is nice to stake on."

The speed skating oval, also known as "the Ice Ribbon" due to its slick exterior lighting beams, uses carbon dioxide as a refrigerant, instead of the harmful substance Freon. The new cooling system is a first for the Winter Olympics, and helps maintain consistent temperature, density and firmness of ice across the track, allowing skaters to push to their limits.

Guided by Canadian chief ice technician Mark Messer, who is serving at his sixth Olympics in Beijing, the venue's Chinese ice-making team gained valuable experience during the test event.

"The chemistry between Mark and our local team is working pretty well. The hands-on involvement of our own staff in every aspect of preparations for the Olympic track will help us better operate the venue for our future business," said Wu Xiaonan, operation director of the National Speed Skating Oval.

Dutch skater Tim Prins, who was third in the men's 500m, said the improvement of the ice quality from the pre-event training until the competition days was impressive.

"On the first day we were here, the ice was a little bit soft," he said. "It became better and better every day. Yesterday was really fine. So I think the conditions are good."

As the first event run without spectators under Beijing 2022's COVID-19 policies, the speed skating China Open trialled most of the countermeasures. These included the closed-loop management of athletes and operational staff, remote online interviews, repeated medical testing for all participants, including media, and a mandate on wearing facial masks inside the venue for everyone except athletes during their competitions.

Athletes were also asked to handle the medals themselves during the presentation ceremonies as part of the social-distancing measures.

Wu insisted that, while the protocols are strict, they are implemented with a warm and caring approach to make everyone feel at ease.

"I think the pandemic control work was really well organized at this event," said Kraaijeveld, winner of the women's 3,000m. "The protection helps make sure that athletes are safe and secure to focus on their training and competition."