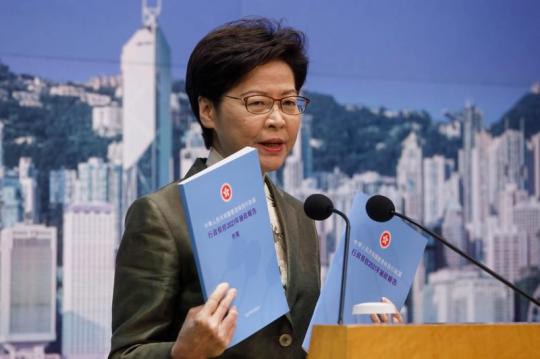 Hong Kong Chief Executive Carrie Lam Cheng Yuet-ngor holds up booklets of the 2021 Policy Address during a press briefing ahead of the weekly Executive Council meeting in Hong Kong on Oct 5, 2021. [PHOTO PROVIDED TO CHINA DAILY]

Healthy legislative and executive relations in Hong Kong have boosted its government's confidence in implementing initiatives in the latest policy address, and will create favorable conditions for the massive plan's materialization, Hong Kong's top leader said on Thursday.

Chief Executive Carrie Lam Cheng Yuet-ngor made the remarks during a question-and-answer session in the Legislative Council a day after delivering the last address of her current term in office.

At the session, Lam responded to lawmakers' concerns about the address－mainly about the plan's timetable and cost.

Lam said that with an improved political environment in the legislature, she believes the proposals included in the policy address will be discussed rationally by lawmakers, so they will achieve the best results and make practical contributions for the community.

Since November, the current legislative session has passed 46 bills and approved more than HK $320 billion ($41.6 billion) in spending, Lam said.

As Hong Kong is back on the right track of "one country, two systems", now is the best time with the best momentum to launch progressive plans to seek greater development, Lam said.

Many legislators said their sectors felt inspired by the new policy address and they are prepared to facilitate its implementation.

Barrister and lawmaker Eunice Yung Hoi-yan said at the session that she supported the increased attention to the Guangdong-Hong Kong-Macao Greater Bay Area in the policy address and hoped it would open up more opportunities for professionals.

Yung is among Hong Kong's first group of lawyers to pass the GBA Legal Professional Examination, making them eligible to practice in the Chinese mainland cities of the Bay Area.

Ma Fung-kwok, a lawmaker representing the city's sports, arts and culture sector, said the art industry has set up a copyright-focused group to follow up on the legislative amendment to the Copyright Ordinance.

It is one of 40 outdated pieces of legislation to be amended according to the policy address.

Lam agreed to meet with the group soon and jointly move the amendment forward.

Some lawmakers also expressed their concerns about the ambitious plan.

Lau Kwok-fan estimated that it would take 20 years to finish the Northern Metropolis project, which will settle 2.5 million people and create 650,000 jobs.

He worried that, affected by the lengthy period, Hong Kong may miss the development of the country's 14th Five-Year Plan (2021-25), and also lag far behind the construction of the Qianhai Cooperation Zone, a poster child of Shenzhen-Hong Kong collaboration.

Lam said to accelerate the project, the government will set up a dedicated coordination office for the project under the Chief Secretary for Administration's office.

The policy address also proposed expediting land and housing supply, including amending the Town Planning Ordinance and other legislation next year.