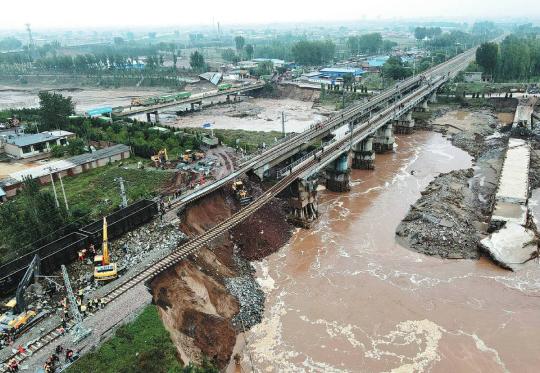 Rescue teams repair a southern section of the Datong-Yuncheng Railway, the foundation of which was washed away by floodwaters, in Qixian county, Shanxi province, on Thursday. (Photo by Li Zhaomin/for China Daily)

The lives of people in some parts of central and northern China were disrupted by days of heavy rain that triggered disasters like landslides and flooding during the National Day holiday.

The province has seen unusually heavy rain in recent days, with the accumulated rainfall in most parts of Shanxi from Saturday to Wednesday exceeding 100 millimeters and some surpassing 200 mm, said Hu Xiao, chief weather analyst at Weather China, a website of the China Meteorological Administration.

The province has seldom seen such strong precipitation in early October, with the rain creating record highs for the period in cities including Taiyuan and Jinzhong, he said.

The rain stopped on Wednesday, but will resume on Friday and Saturday, Hu added.

Villages, farmland and roads in low-lying regions near the Wuma River in Qingxu county, Taiyuan, have been submerged by rising water, forcing the evacuation of more than 15,000 people in eight villages.

Ten pairs of trains running through Qixian county, Jinzhong, saw services suspended because the railway base on a bridge was washed away by rapidly flowing water.

More than 380 soldiers have been working on consolidating dikes along the Xianyang River since Wednesday.

They had consolidated 600 meters of dike and moved 2,000 sheep to safety by Thursday morning, Yang Zhongfeng, an official in Beiguang, a town in Jinzhong, told people.cn.

Rising river levels caused by continuous rainfall have been observed not only in small rivers in some areas but also in the Yellow River, triggering this year's third flood warning.

The Ministry of Water Resources has dispatched nine work teams to Chongqing and the provinces of Shaanxi, Shanxi, Henan, Shandong and Sichuan to guide local flood-control work.

Shandong, on the lower reaches of the Yellow River, has been greatly challenged by flooding, its flood control and drought relief headquarters said, adding that an emergency response for flood control was launched on Wednesday.

Reservoirs in the middle section of the Yellow River that are discharging water to keep it below warning levels are creating pressure on Shandong, the headquarters said on Wednesday.

The water flow of the Yellow River in Shandong has reached 5,000 cubic meters a second and the flow will maintain that speed for about 15 days, it said.

Thousands of people in nine Shandong cities along the Yellow River are working round-the-clock to patrol dikes and areas around the river to spot any dangerous flooding.

More than 5,000 people have been working in Dongping to consolidate dikes and stem the seepage.