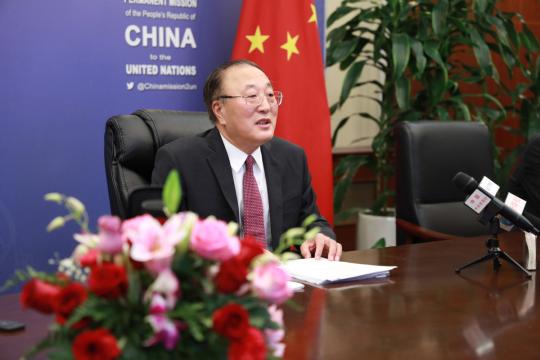 Zhang Jun, China's permanent representative to the UN, speaks in a virtual briefing on President Xi's statement on China's solutions to global challenges, in this Sept 2021 file photo. [Photo/Xinhua]

China's ambassador to the United Nations on Monday called on the United States to put away its arrogance and prejudice, don't make mistakes again and again.

At the seventy-sixth session of the Third Committee (Social, Humanitarian and Cultural) of the General Assembly, China's permanent representative to the United Nations, Zhang Jun, refuted the groundless comments on issues related to Xinjiang, Hong Kong and Tibet made by the United States, Germany and some other countries.

The envoy emphasized that China firmly oppose the abuse of the platform of the UN to deliberately provoke confrontation and fabricate human rights issues to interfere in China's internal affairs. Zhang warns the United States not to go further down the wrong path.

Zhang said the United States fabricated crimes and lies out of political motives and made groundless accusations against China. The so-called "forced labor" and "genocide" in Xinjiang is the "lie of the century" made by the previous US administration and the US today inherits all the lies and continues to follow the old path of "lie diplomacy."

Lies repeated a thousand times are still lies. Countless facts have proved that the US's accusation is groundless and made out of its own political needs. The purpose is to cause chaos and contain China's overall development. China firmly opposes and rejects this, said the envoy.

Zhang pointed out that the international community should pay attention to the human rights situation in the United States.

"I hope that the United States will know how to return to the right track of dialogue and cooperation, and do something practical and good for the promotion and protection of human rights," said Zhang.