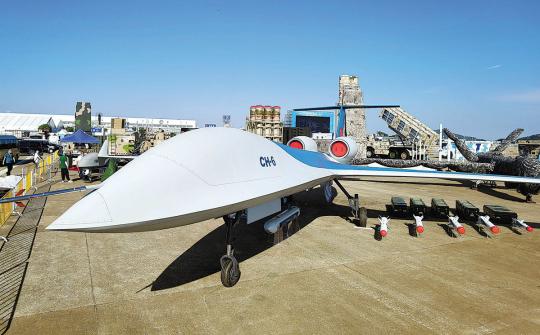 A prototype of the CH-6 multirole unmanned aircraft to be displayed at the Zhuhai Airshow in Zhuhai, Guangdong province. (Photo/China Daily)

China has established a reputation as a reliable supplier of advanced military drones in the international market. Now, the nation is offering a new model that is said to be suited for almost all air-based tasks.

With a length of 15.8 meters and a wingspan of 20.5 meters, the large drone features high-altitude flying, fast speed, strong carrying capacity and long endurance and range, said Shi Wen, chief designer of the academy's CH series.

"The CH-6 is capable of performing a wide range of tasks including high-altitude reconnaissance and airstrike, anti-submarine and sea patrol operations, long-range early warning and close-in firepower support," he said in Zhuhai on Monday. "In future combat scenarios, the drone can engage in action in groups and can also cooperate with piloted aircraft or other unmanned hardware to conduct various types of operations."

Designed for future warfare, the new model shows that the CH family has obtained high-speed operational capability at high altitudes, Shi said, noting that it targets the high-end arms market and will soon be available to buyers around the world.

Propelled by two turbofan engines, a CH-6 has a maximum takeoff weight of 7.8 metric tons, and is able to carry 450 kilograms of equipment and ammunition including electrooptical sensors, radars and missiles.

It can fly up to 700 kilometers per hour in a typical cruise flight and can stay in the air as long as 21 hours at a slower, more fuel-efficient speed, according to the drone's technical specifications.

The CH-series unmanned aircraft have been sold to armed forces in more than 10 countries in the Middle East, Southeast Asia and Africa, making them the largest military drone family China has exported, according to Qin Yongming, general manager of the academy's unmanned aircraft business.

The most popular model to date-the CH-4-is well regarded by its users for its excellent service records in several regional wars and conflicts. The drone has conducted more than 4,000 flights over the past decade under the control of its foreign operators, boasting over 20,000 flying hours and an astonishing kill rate of 99 percent in its more than 800 missile strikes, he said.

The China Academy of Aerospace Aerodynamics is a Beijing-based subsidiary of China Aerospace Science and Technology Corp, a State-owned defense conglomerate. It started to research and develop the CH drones in 2000.