In Xinjiang, lives improve with transportation 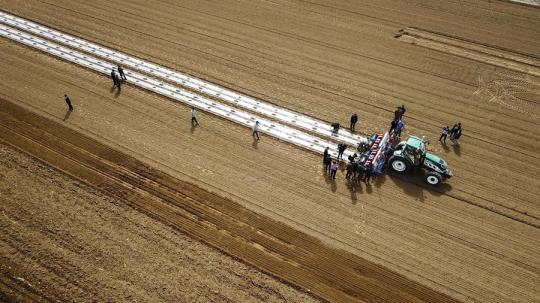 Residents of the Xinjiang Uygur Autonomous Region shared stories about how the development of roads and airports has changed their lives for the better at a news conference on Saturday.

The region's transportation network has been steadily improving. For example, as of the end of 2020, the total length of Xinjiang's road network had reached 209,200 kilometers, with major highways surpassing 7,640 km. The number of civil airports in the region has grown to 22.

Ayjamal Rozi, 28, a villager from Xinhe county in Xinjiang's Aksu prefecture, said she is a beneficiary of improved roads.

"When I was young, my parents made a living by cultivating wheat and walnuts. If it was rainy during the harvest season, the tractor couldn't get to our village over the muddy roads. My parents then had to use donkey carts to transport the harvest, which is really toilsome," she recalled.

After the road to her home was paved, however, more customers came to the village to purchase the cotton, walnuts and peaches grown there.

"Transportation also helps boost local tourism, and young people in my village can now run their own businesses instead of becoming migrant workers," she added. "The paved roads have brought us a better life."

Silimhan Matrozi, 24, from Yutian county in Hotan prefecture, graduated from Zhejiang Normal University last year. She got a job at the airport in her hometown, which is more than 1,000 km from Urumqi, the regional capital.

"In the past, we had to take a bus for more than 30 hours to get to Urumqi. With the airport, which was built last year, it only takes an hour and a half," she said.