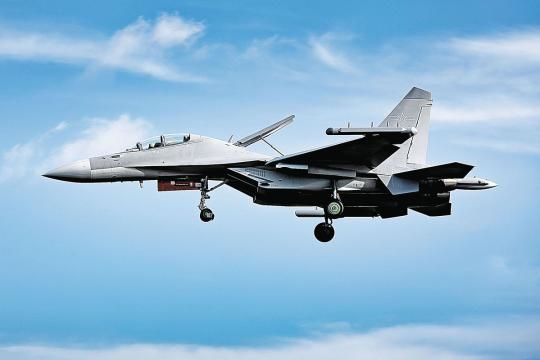 The People's Liberation Army Air Force will unveil its latest electronic warfare aircraft this week at the 13th China International Aviation and Aerospace Exhibition, the largest arms show in the nation.

Air Force spokesman Senior Colonel Shen Jinke said on Friday that the J-16D will be on display at the biennial exhibition, popularly known as the Zhuhai Airshow, which will open in Zhuhai, Guangdong province, on Tuesday and end on Sunday.

Shen said the plane is an electronic warfare variant of the J-16 multirole strike fighter, which is itself a development of the J-11B combat jet. They are all products of Shenyang Aircraft Corp, one of the military aircraft makers under State-owned defense conglomerate Aviation Industry Corp of China.

Though almost all of the PLA Air Force's top hardware, including the J-20 stealth fighter jet and H-6K long-range bomber, will be featured at the event, Chinese aviation and weapons fans said the J-16D is the one they are most looking forward to seeing as the plane had been highly protected by the Air Force and was deemed one of the most secret weapons in the service.

A J-16D landed at an airport near the Zhuhai Airshow's outdoor exhibition area on Tuesday. Photos of it soon went viral on domestic weapons websites, becoming a major focus of the arms show because pictures and information about the jet had been rare on the internet, even though it has been almost six years since the plane made its maiden flight.

Wang Yanan, editor-in-chief of Aerospace Knowledge magazine, said the J-16D has become the most advanced electronic warfare equipment in the PLA Air Force and is a "power amplifier" in the service.

"In the past, the Chinese military had no tactical aircraft dedicated to electronic warfare," Wang said. "It equipped some aircraft, such as the JH-7A strike fighter, with electronic warfare pods, but such instruments can only allow the planes to defend themselves against electronic measures by the enemy rather than carrying out jamming and other electronic operations.

"Without a specialized electronic attack aircraft like the J-16D, it would be difficult for the PLA Air Force to organize large-scale airstrikes because its fighter jets and bombers would be at great risk in confrontations with enemy air-defense radars and missiles as well as advanced combat jets.

"The J-16D will disrupt the enemy's radar and other electronic apparatus of ground-based air-defense networks, detect their locations and then launch anti-radiation missiles to eliminate them, thus clearing the airspace for fighter jets and bombers to perform their tasks. It can also take out early-warning aircraft to 'blind' the enemy."

Wu Peixin, a military observer in Beijing, said that the J-16D's major weapons are signal interceptors, electronic and communication jammers and anti-radiation and air-to-air missiles.

He said before the Chinese jet, only the United States had dedicated electronic attack aircraft in active service, and such planes have proved to be very useful in combat.

The 13th Zhuhai Airshow was originally scheduled to take place in November last year, but it was postponed due to the impact of COVID-19.