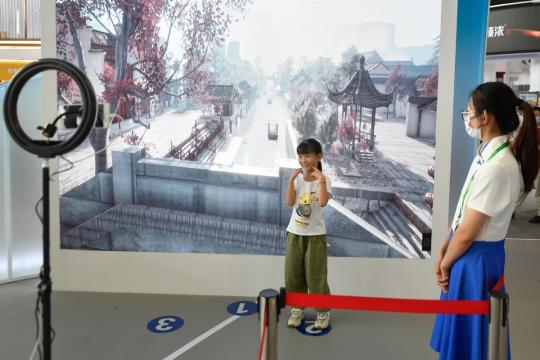 A girl tries an AI interaction program at the Light of Internet Expo in Wuzhen, Zhejiang province, on Sept 25, 2021. (Photo/Xinhua)

China is willing to work with other countries to make the digital civilization benefit people of all countries and promote the building of a community with a shared future for mankind, President Xi Jinping said in a congratulatory letter to the 2021 World Internet Conference Wuzhen Summit, which opened on Sunday in Wuzhen, Zhejiang province.

Nowadays, profound changes in the world unseen in a century and the epidemic situation are intertwined, Xi said.

It is imperative for the international community to join hands to seize opportunities and meet challenges by following the trend of informatization and digitalization, as well as networking and smart development, he added.

In an address at the conference's opening ceremony via video link, Vice-Premier Liu He called for global efforts to ensure the safety and reliability of infrastructure, crack down on illegal activities in the internet sector, ensure fair competition and promote innovation.

Liu said China will be dedicated to promoting high-quality development and reform and opening-up, and the country will continue to support the healthy development of the internet and digital economy, as well as the private business sector.

The three-day conference, with the theme "Towards a New Era of Digital Civilization－Building a Community with a Shared Future in Cyberspace", is both timely and forward-looking, said Liu Zhenmin, undersecretary-general for economic and social affairs at the United Nations.

"It provides a framework for examining the impact of digital transformation in promoting an inclusive and sustainable recovery from the COVID-19 pandemic," Liu said.

As close to half of the global population－an estimated 3.6 billion people mainly in developing countries－remains offline, Liu said he believed closing the digital divide must be a top priority.

"Harnessing resources from multi-stakeholder partnerships can help facilitate needed investments in digital infrastructure and capability building. At the same time, efforts must be accomplished by strengthened policy frameworks and international cooperation," he said." (And) there should be greater international cooperation to support the development of 5G technologies."

With the booming internet, 5G, big data and other emerging technologies, the digital economy is gradually becoming the integral driving force for economic growth. According to a white paper released by the China Academy of Information and Communications Technology, the added value of China's digital economy reached 39.2 trillion yuan ($6 trillion) in 2020, accounting for nearly 40 percent of the country's GDP.

"China's commitment to innovation is clear, as the 14th Five-Year Plan (2021-25) and 2035 long-term development goal identify it as a top priority," said Amon. "We are already working with Chinese companies across many industries, helping them achieve their goals in China and around the world."

Elon Musk, CEO of Tesla Inc, said, "China spends a lot of resources and efforts applying the latest digital technologies in different industries including the automobile industry, making China a global leader in digitalization. Tesla will continue to expand our investment and R&D efforts in China."

Zhou Hongyi, founder and chairman of 360 Security Group, said that while the internet and digital economy bring new development opportunities, they also pose cybersecurity challenges, and enhanced efforts are needed to deal with the new problem.