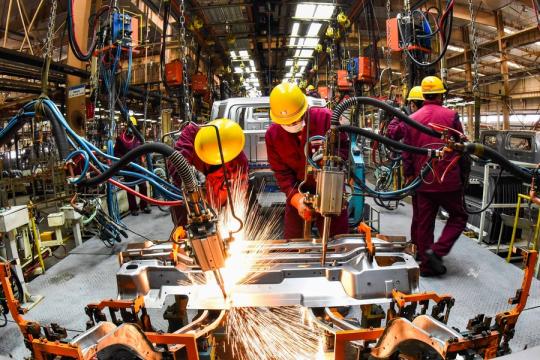 China is expected to see 8.1 percent economic growth this year, as solid export performance and increased fiscal support in the second half will offset a more protracted recovery in household consumption, said economists at the Asian Development Bank.

The forecast made by the Manila-based development bank on Wednesday was unchanged from its projection in April. However, the ADB lowered the GDP growth forecast for developing Asia, which groups 46 developing economies in the Asia-Pacific region that are members of the bank, to 7.1 percent this year, down from the prediction of 7.3 percent in April.

"We would expect a more protracted recovery in household consumption (in China), while at the same time, this would be compensated by higher infrastructure investment and ongoing good export performance," said Dominik Peschel, head of the economics unit for the ADB resident mission in China.

Economists at the bank expect household demand in China to further recover gradually, and this should also help the services sector.

"We think people will travel more and demand more services once the COVID situation is fully under control and the restrictions have been lifted," Peschel said.

China's recovery from the COVID-19 pandemic is in good shape, showing the strong resilience and vigorous dynamics of the economy, said Liu Qiao, dean of the Guanghua School of Management of Peking University.

Looking ahead, China's economic fundamentals are still strong and its future growth will remain stable in 2022, said David Chao, global market strategist for the Asia-Pacific region (except Japan) at Invesco, who added that the country could further tap the potential of its monetary policy to support the economy.

"Another cut in the reserve requirement ratio is possible in the second half of this year," Peschel said. "At the same time, credit to the real estate sector and shadow bank financing will remain tightly regulated."

Peschel said he is looking forward to more fiscal support because there is room to increase spending without incurring a high fiscal deficit as revenue recovers. New issues of local government special bonds will pick up and will support infrastructure investment in the second half of the year, and manufacturing investment should expand solidly in line with robust exports, the report said.

The Organization for Economic Cooperation and Development said in its interim economic outlook released on Tuesday that China's real GDP is expected to grow 8.5 percent this year and 5.8 percent in 2022. Both figures are the same as the OECD's projections in May.