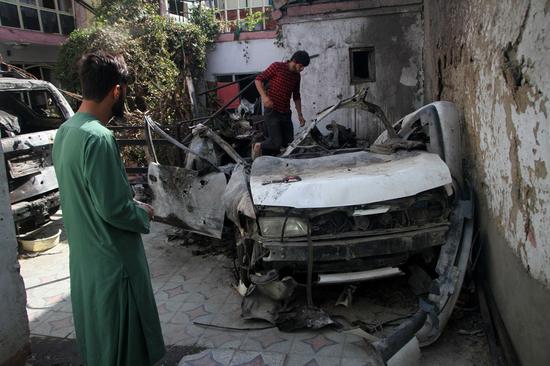 Photo taken on Sept. 2, 2021 shows damaged vehicles at the site of the U.S. airstrike in Kabul, capital of Afghanistan. (Photo by Saifurahman Safi/Xinhua)

Kenneth McKenzie, commander of U.S. Central Command, admitted on Friday that a U.S. drone strike in late August in Kabul killed as many as 10 civilians, including 7 children.

"Having thoroughly reviewed the findings of the investigation and the supporting analysis by interagency partners, I am now convinced that as many as 10 civilians, including up to seven children, were tragically killed in that strike," McKenzie told reporters during a Pentagon press briefing.

"We now assess that it is unlikely that the vehicle and those who died were associated with ISIS-K, or were a direct threat to U.S. forces," he added.

The general admitted the deadly strike was a mistake. "As the combatant commander, I am fully responsible for this strike and this tragic outcome."

The U.S. Central Command said on Aug. 29 that it launched a drone strike on a vehicle in Kabul, which it claimed had eliminated an "imminent" threat, posed by ISIS-K, an Afghanistan-based offshoot of the Islamic State, to the Hamid Karzai International Airport, where evacuations of U.S. service members and personnel were underway.