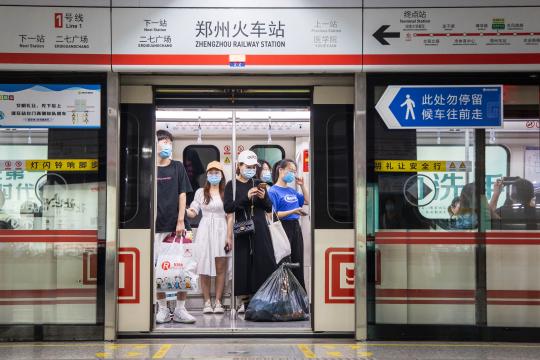 Services on three of the seven subway lines in Zhengzhou, Henan province, resumed on Sunday after disruptions caused by heavy downpours nearly two months ago.

The service intervals on lines 1, 9 and part of line 2 will be more than six minutes, operator Zhengzhou Metro said.

It said it will monitor changes in passenger flows closely and promptly arrange standby trains to meet the demands of the traveling public. Subway stations have also set up baby care rooms and are now equipped with trolleys, emergency umbrellas and medical kits.

In addition to regular security checks, passengers will also need to have their temperatures tested, show valid health codes and wear masks throughout the ride and keep a safe distance inside the carriage. The city was hit by a COVID-19 outbreak in August.

Wu Kebiao, an insurance agent in Zhengzhou, said the suspension of subway services had made life and work less convenient.

He used to spend 20 minutes traveling to work every day, but the commuting time almost doubled after the subway was suspended and he had to drive a car to work.

"During that period, I usually had to get to my destination 30 minutes earlier because of the increased number of people driving after the subway shut down, which often caused traffic jams and made it difficult to find a parking space," Wu said.

Zhengzhou Metro said its daily passenger traffic accounted for more than 40 percent of the public transport trips in Zhengzhou, which has more than 10 million residents.

The heavy rain in July caused 302 deaths in Henan province. Fourteen people died on July 20 when Zhengzhou's line 5 was inundated, according to the provincial government.

All of the subway lines in Zhengzhou were shut down for repairs after the downpour.

Since Aug 22, the city's transport department has entrusted two companies to carry out safety evaluations.

They completed the evaluation of six lines by Sept 4 and issued a report approving the resumption of services on them.