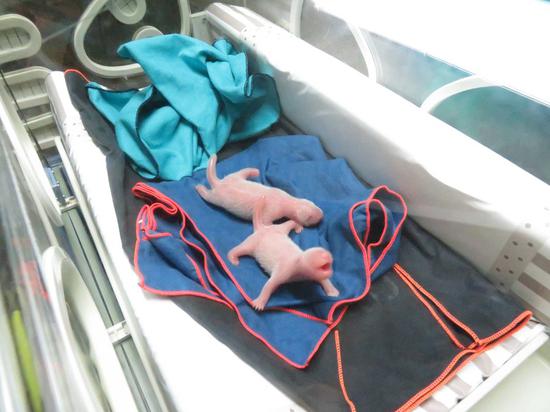 Two giant panda cubs born in the Madrid Zoo Aquarium on Monday were doing fine and in good health, according to the zoo authorities on Tuesday.

It is still too early to confirm the sexes of the baby pandas, said the zoo, expecting for help from two specialists from China's Chengdu Research Base of Giant Panda Breeding.

"Two specialists from Chengdu are here and their advice has been very important because they have a lot of experience. They're helping us a lot, above all in handling the twins, which are very delicate," zoo keeper Eva Martinez told Xinhua.

The first eight weeks will be the most crucial for the survival of the two delicate cubs.

"In the wild, the mother chooses one to raise and leaves the other. But thanks to the knowledge of the Chinese specialists we've been able to manage both of them by interchanging them," added Martinez.

Over the next 20 days, the hairless, pink cubs will begin to open their eyes and their skin will pigment as they begin to grow fur. Yet they will need special attention for two and a half months while they gain strength, and they will be given names with Spanish-Chinese symbolism chosen by the public on social media.

The twin cubs are the fifth and sixth offspring born in the zoo to Hua Zuiba, a female panda, and her partner, Bing Xing, who are on loan from China.

"It's an achievement and a success that she has given birth again as the animal is already 17 years old," another keeper, Maria Delacrux told Xinhua.

Through the Parques Reunidos Foundation, the Madrid Zoo Aquarium is working with China on the conservation and reforestation of panda habitats.

According to the zoo, its conservation programme and those of other breeding centres and zoos are vital for ensuring the survival of the giant panda species, which has seen its threat category reduced from Endangered to Vulnerable.

"The birth of pandas is very important for the zoo and the breeding programme, and thanks to all the successful births in different institutions the threat to the giant panda has lessened and we now have more individuals than a few decades ago," Martinez told Xinhua.