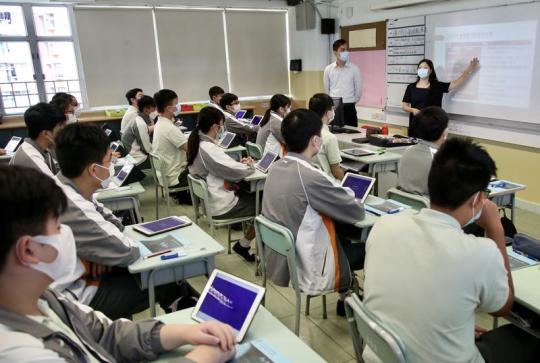 A number of Hong Kong secondary schools started their first classes of the revamped liberal studies course, now known as citizenship and social development, as the new school year kicked off on Thursday.

Authorities from the schools said they hope the revamped subject will help instill positive values in students and foster a stronger sense of national identity.

Educators, parents and political figures had long called for an overhaul of liberal studies, citing politicization of the subject to the point that young people were misled to become politically radicalized, as attested by the large number of teenagers arrested for their involvement in the 2019 social unrest.

Thursday marked the official roll out of the overhauled subject. The revised curriculum covers three modules: Hong Kong under "one country, two systems"; the country since reform and opening-up; and interconnectedness and interdependence of the contemporary world.

Heung To Secondary School (Tseung Kwan O) is one of the schools that began teaching the class from Thursday. Its principal, Tang Fei, said the new curriculum is more comprehensive and could help students get a clearer overall understanding of the city, as well as the nation.

He also considered it meaningful for students to take part in extracurricular activities the school will provide, such as the national flag-raising ceremony.

Ho Hon-kuen, chairman of Education Convergence, expressed support for the overhauled subject. He said students would also benefit and learn from school activities such as flag-raising ceremonies, especially on National Day and the anniversary of the city's return to the motherland.

National security and the National Security Law for Hong Kong is a new section under the revamped curriculum, which is what G. T. (Ellen Yeung) College in Tseung Kwan O taught students in their first citizenship and social development class.

Raymond Tam Kwok-wai, principal of the college, said national security education was a good starting point for the subject, as it is a much-discussed topic in the city, making it easier to stimulate students' interest in the subject.

Tam said it is important for students to know the concept of national security and the necessity of safeguarding it, and learn to appreciate the stability and prosperity the city enjoys.

Kwok Wing-yin, a fourth year secondary student at the college, said after class that she wanted to know more about the National Security Law for Hong Kong and the legal cases arising from its implementation.