Themed "Towards Digital Future and Service Driven Development," the fair, held both online and offline, will tap the potential of cutting-edge digital technologies and functions as a platform for promoting world economic recovery and growth.

Enterprises from home and abroad have flocked to the fair, hoping to seek opportunities in the world's second-largest economy.

The 2021 CIFTIS has attracted the registration from more than 12,000 enterprises, up 52 percent from that in 2020. Representatives from 153 countries and regions signed up for the event, according to the Ministry of Commerce (MOC).

Up to 21 percent of offline exhibitors are Fortune 500 companies or industry leading enterprises, according to the MOC.

Along with Thursday's Global Trade in Services Summit of the 2021 CIFTIS, five summit forums as well as 119 thematic forums and conferences will also be held on the sidelines.

The holding of CIFTIS this year has shown that China is open and confident about embracing the world, and is committed to working with the global community to "make its market cake bigger" so that everyone can enjoy and share the benefits, said Michael Bi, EY Greater China Markets Managing Partner.

MOC data showed that China's services trade rose by 7.3 percent year on year to nearly 2.81 trillion yuan (about 435.02 billion U.S. dollars) in the first seven months of the year. 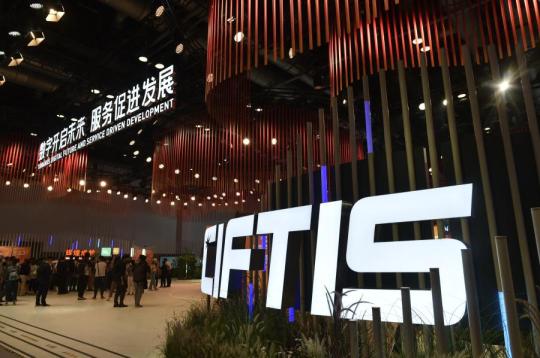 Journalists visit a venue of CIFTIS at the China National Convention Center in Beijing, capital of China, Aug. 31, 2021.(Xinhua/Lu Peng)

Chinese President Xi Jinping on Thursday announced a slew of new measures at the Global Trade in Services Summit.

China will open up at a higher level, by implementing across the country a negative list for cross-border services trade and by exploring the development of national demonstration zones for the innovative development of trade in services, said Xi.

The country will also scale up support for the growth of the services sector in the Belt and Road partner countries and share China's technological achievements with the rest of the world, according to Xi.

At 2020 CIFTIS, Xi made three proposals for the international community, including jointly fostering an open and inclusive environment for cooperation, working together to invigorate momentum for cooperation driven by innovation, and making joint efforts to break new ground in win-win cooperation.

Over the past year, China has walked the talk in turning those proposals into concrete actions. 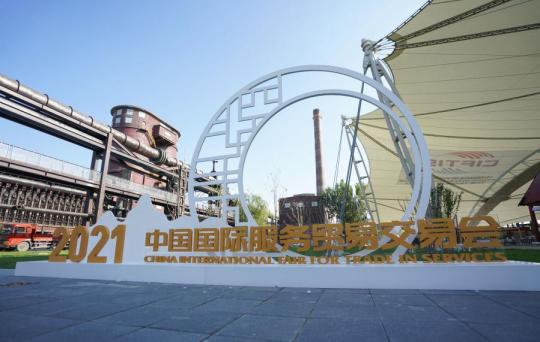 Photo taken on Aug. 31, 2021 shows a venue of CIFTIS at Shougang Park in Beijing, capital of China.(Xinhua/Chen Yehua)

According to a report published by the Organization for Economic Cooperation and Development, China is one of the economies that saw the largest declines in services trade restrictiveness in 2020.

Xi announced on Thursday that China will set up a stock exchange in Beijing and build it into a major base for innovative small and medium-sized firms.

The further opening up of China's financial market will present significant opportunities for the company and its clients, Wei said, adding that global investors have shown great interest in China and some have beefed up their investment. 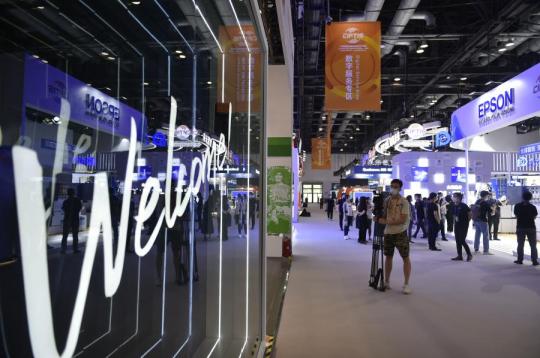 Journalists visit a venue of CIFTIS at the China National Convention Center in Beijing, capital of China, Aug. 31, 2021.(Xinhua/Lu Peng)

"The COVID-19 pandemic has accelerated the digitalization of trade in services, thus providing opportunities for structural adjustment and the development of new services trade businesses," said Vice Minister of Commerce Wang Bingnan at a press conference last week.

In 2020, China's digitally deliverable trade in services stood at 294.76 billion U.S. dollars, up 8.4 percent year on year and accounting for 44.5 percent of the total services trade, MOC data showed.

This year's CIFTIS features a special section for digital services for the first time, with up to 33 well-known enterprises and institutions participating in the special section.

China has made digital development a clear national strategy, and achieved stunning achievements in information infrastructure construction in the past few years, said Michael Bi.

With the sound infrastructure base, vast smart terminals and digital environment, China will speed up its digital transformation, he added.