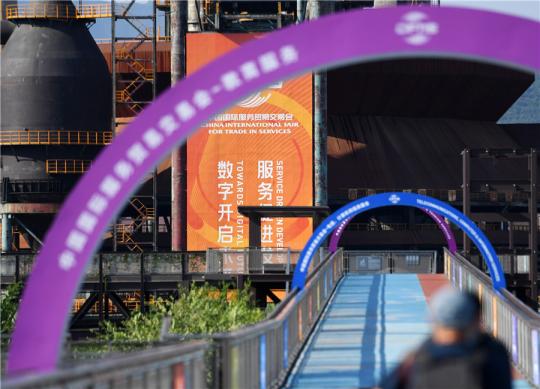 A bridge at Shougang Park, one of the two venues for the 2021 China International Fair for Trade in Services, is seen in Beijing on Aug 31, 2021. (Photo/Xinhua)

China's trade in services rose 7.3 percent year-on-year to 2.81 trillion yuan ($434.99 billion) in the first seven months of this year, significantly boosting economic growth, said the Ministry of Commerce on Thursday.

The ministry unveiled the trade figures during the 2021 China International Fair for Trade in Services-CIFTIS－that opened both offline and online on Thursday and will close on Tuesday in Beijing. Participants from about 153 countries and regions are attending the event.

This year's fair is having an exhibition area of 130,000 square meters, which is 18 percent larger than last year's space, and will host 198 summits, forums, meetings and promotional events, she said.

Trade in services covers a wide range of services that can be traded, like those in finance, telecommunication, logistics, human resources, education, healthcare, construction, advertising, computing and accounting.

As digital services have become a new engine for global trade, a digital service exhibition zone has been set up this year for the first time, covering 11,000 square meters.

"In this increasingly digital era of globalization, digital trade has become a high ground that countries led by the United States are striving to seize," said Liu Yingkui, a researcher with the China Council for the Promotion of International Trade.

According to a recent report published by global consultancy firm McKinsey &Co, a large gap in the digital dimension separates a handful of leading countries and the rest of the world. The report ranked 139 countries on the basis of inflows and outflows of goods, services, finance, people and data. Singapore led the rankings, followed by the Netherlands, the U.S. and Germany.

As higher-level opening-up has been enhancing trade in services by removing restrictive measures, the sector grew robustly and helped attract a large amount of foreign investment in recent years, said Chen Chunjiang, director-general of the ministry's department of trade in services and commercial services.

Marriot International, a U.S.-based hotel chain, opened two hotels in Beijing's Yanqing district last week, as there has been a surge in demand for domestic leisure travel in China. Yanqing will be one of the venues for the Beijing 2022 Winter Olympic Games.

Consumers in China are more than ever seeking high-quality tourism services, and better tourism service quality and travel management could help create stellar travel experiences for tourists and an increase in customer engagement, said Henry Lee, president of Marriot International in China.

"We currently operate more than 23 hotels in the Chinese capital and look forward to further expanding our portfolio, in order to offer unique and personalized services for travelers with changing spending preference," he said.