Envoy calls for 'return to rationality' 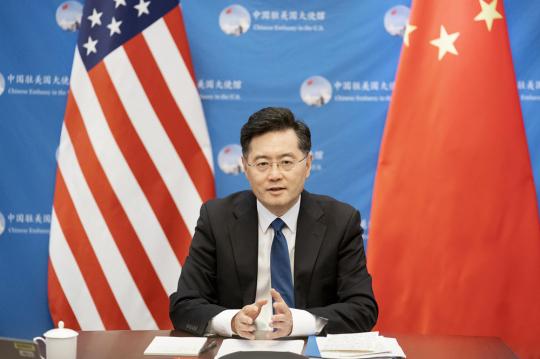 Chinese Ambassador to the U.S. Qin Gang (Photo/Chinese Embassy to the U.S.)

China and the United States must find a way to get along peacefully rather than risk conflict or confrontation, Chinese Ambassador to the U.S. Qin Gang said in a major speech a month after he took office in Washington.

Instead of missing historical opportunities or making historical mistakes at a "critical juncture" for bilateral ties, the two countries need to "return to rationality, take a responsible attitude to history, to the two peoples and to the world, and keep to the right direction of the China-U.S. relations", Qin said on Tuesday.

Speaking at an online reception by the National Committee on U.S.-China Relations Board of Directors, the new envoy cautioned that relations are mired in a "very severe situation", with some in the U.S. having either a "serious misjudgment" of China's strategic intention, or wrong beliefs for the prospects of such relations.

"The extreme China policy of the previous U.S. administration has caused serious damage to our relations, and such a situation has not changed. It is even continuing," Qin said, adding that it goes against the fundamental interests of both peoples and the wishes of the international community.

U.S. President Joe Biden, while speaking on the end of the war in Afghanistan on Monday afternoon, continued to say, "We're engaged in a serious competition with China."

To those who believe that U.S.-China cooperation is being phased out by competition and confrontation, Qin said that was a very misleading perception for the prospects of China-U.S. relations.

"In fact, the need for China-U.S. cooperation is not decreasing but increasing. Our two countries should not be enemies, but partners," he said.

Qin, who was vice-minister of foreign affairs before assuming the ambassadorship, said he met with the American business community in China, whose members told him that no country can take the place of China in the global industrial chain and that they value the Chinese market and hope to expand their investments.

"They are firmly opposed to the trade war, to decoupling, and to cutting off supplies to Chinese companies. They are most worried about the uncertainty that a worsening China-U.S. relationship may have on them," he said.

The ambassador also noted that some people in the U.S. believe that China is betting against America, and China's goal is to challenge and displace America. That belief is a "serious misjudgment" of China's strategic intention.

China's plans and policies are tailored to pursue happiness for the Chinese people, for the purpose of meeting the people's aspirations for a better life. It has never considered surpassing the U.S. as its goal, or having the ambition to challenge and displace America, or to seek hegemony in the world, Qin said.

"We are glad to see America remain prosperous and strong and make a greater contribution to world peace and stability," he said. "I believe that both countries can benefit from the development and prosperity of the other side."

To those who believe that the U.S. needs to deal with China from a "position of strength" and that it can win the new "Cold War" against China as it did with the Soviet Union, Qin noted that such a belief amounted to "serious ignorance" of history and China.

It would be absurd and dangerous to apply the "Cold War playbook" to today's China-U.S. relations, the ambassador said.

He noted that China is not the former Soviet Union, whose collapse was its own doing. While in China, more than 90 percent of its citizens surveyed are satisfied with their government, according to a Harvard Kennedy School survey on Chinese public opinion for 10 years in a row.

Different from the links between the U.S. and the Soviet Union, China and the U.S. are inseparable stakeholders, and the success of one side is critical to the other, he said.

In addition, China never engages in aggression or expansion, nor exports its political system or development model, Qin said.

"I hope American politicians would seriously consider: Does suppressing China really serve their purpose? Does it really meet America's own interests? Who can bear the disastrous consequences to China-U.S. relations and the world? Dealing with China from a position of strength — the Chinese people simply do not accept it," Qin said.

As two major countries with different political systems, cultures and stages of development, China and the U.S. must find a way to get along in peace based on mutual respect, he said.

That requires the two sides to be clear about each other's bottom lines and show mutual respect, maintain dialogue and manage differences, remove disturbances and focus on cooperation.

To underscore why Chinese people so value sovereignty and territorial integrity, Qin said it is an important historical rule for the Chinese civilization that when the country remains stable and united, it will enjoy prosperity and development; when it is in war, turbulence or division, it will suffer humiliation and disaster.

"If anyone supports or connives at 'Taiwan independence', the 1.4 billion Chinese people will never agree," Qin said. "Just imagine, if anyone wants to get an American state independent from the U.S., will the American people say yes? Please put yourselves in our shoes.

"I hope that the U.S. side will earnestly respect China's core interests and cautiously handle these issues. This is the fundamental precondition to achieve no conflict and no confrontation and develop a constructive China-U.S. relationship," he said.