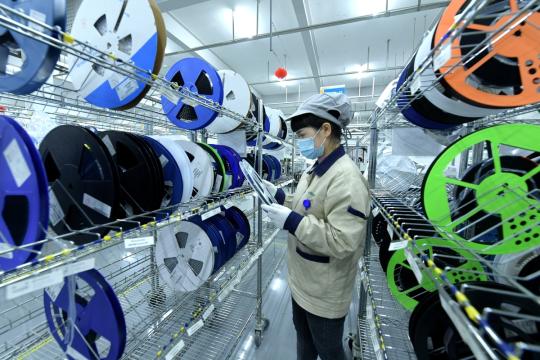 The central government has rolled out policies to beef up employment during the 14th Five-Year Plan period (2021-25), and is confident about maintaining a stable job market over the next five years.

The State Council recently released a plan promoting employment in the years to 2025, showing the nation's ambition to create a higher-quality job market.

According to the plan, China will create more than 55 million jobs in urban areas and keep the urban unemployment rate under 5.5 percent. It aims to increase the labor force's average years of schooling to 11.3 years, with 55 percent receiving higher education by 2025.

He said the expanding services industry and private economy, along with the ever-growing digital economy, are also important drivers of employment.

"The private economy, especially small and medium-sized companies, are now offering 80 percent of the jobs nationwide, having already grown into the main force attracting labor," he said.

"The nation will promote the development of modern services and manufacturing industries over the period of the 14th Five-Year Plan. And the growing digital economy will give birth to more new industries to offer more job opportunities to the public."

For the first time, the plan emphasizes the employment of young people in urban areas, such as high school graduates who do not pursue higher education, and young laid-off workers.

The plan said more jobs suitable for young workers need to be created in the manufacturing, services and labor-intensive industries.

"The young generation is the most active and vigorous group in society, and they have great potential in innovation and entrepreneurship," Zhang Ying, director of the Ministry of Human Resources and Social Security's employment promotion department, told the news conference. "Encouraging young members of the labor force to land jobs is of great importance to high-quality employment and a promising future for the nation."

She said that while employment of young people remains stable, their pursuit of higher work values and better careers puts pressure on the whole job market.

"The plan provides a rather comprehensive scheme for the group's employment over the next five years, which will bring a higher-quality job market to the group by creating diversified job positions, enhancing their working abilities and giving them easier access to job information," Zhang added.