5-year plan gives leg up to chip base material 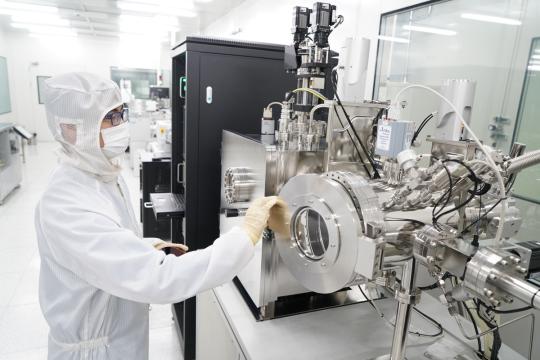 A researcher in Beijing processes wafers made of carbon-based materials. (Photo provided to China Daily)

China's top industry regulator will include silicon carbide, or SiC, an important semiconductor base material, into a five-year plan for industrial technological innovation development.

The move is part of broader efforts by the Ministry of Industry and Information Technology to guide development of carbon-based materials to support chip innovation and development, experts said.

Carbon-based materials can be good substitutes for silicon-based semiconductor materials, and they form an important part of the third-generation semiconductor technologies where China aims to achieve breakthroughs, experts said.

The MIIT said it will include carbon-based materials in the 14th five-year plan (2021-25) for raw material industrial development, and also include SiC and carbon matrix composites in the 14th five-year plan for industrial technological innovation development. The larger goal is to support the industry to tackle technology barriers, so as to improve product quality and promote modernization of industry chains.

Dongxing Securities said in a research note that silicon, which is found in large natural reserves, has become the most important raw material for the manufacture of chips and devices. More than 90 percent of semiconductor products are made of silicon as a substrate.

But limited by the characteristics of the material itself, silicon-based power devices are gradually unable to meet the requirements for high-power and high-frequency devices in emerging applications like 5G, new energy vehicles, and high-speed rail.

So, SiC is expected to partially replace silicon and become a new substrate material for the preparation of high-voltage and high-frequency devices, Dongxing Securities said.

SiC is an important material of the third-generation semiconductor technologies, as China seeks breakthroughs in the third-generation chips for the "post-Moore Era". In 1975, Intel co-founder Gordon Moore formulated a rule that the number of transistors on a silicon chip doubles roughly every two years. But rapid technological advancements may make the rule obsolete in the future.

In May, a government meeting attended by Vice-Premier Liu He discussed the potential disruptive technologies of integrated circuits, or ICs, in the post-Moore era.

Yuekai Securities said in a research note it is clear the third-generation semiconductor technologies are an important development direction, with their downstream applications focusing on 5G base stations, new energy charging piles, intercity high-speed rail transit and other areas.

Xiang Ligang, director-general of the Information Consumption Alliance, a telecom industry association, said: "The main battlefield of the applications of third-generation semiconductor technologies is in China, but it will take a long time for domestic companies to address a string of challenges before widely popularizing these technologies."