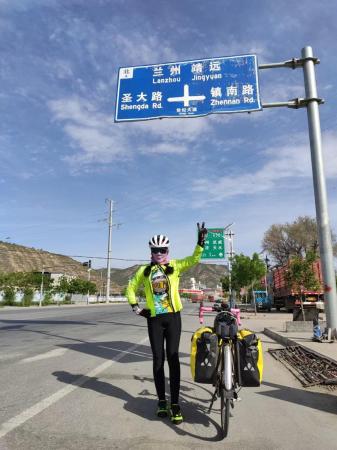 Ben Cheng stops for a photo during her cycling journey along the ancient Silk Road in May. (Photo provided to chinadaily.com.cn)

When Ben Cheng, 63, finished a bicycle journey along the ancient Silk Road in June, she immediately began planning her next trip — a ride along the route of the Long March.

A teacher from Changchun, Jilin province, Ben has cycled more than 100,000 kilometers over the last eight years.

"I have kept up various sports, such as swimming and mountain climbing, for many years," she said. "After retirement, I had more time to expand my interests, and I found cycling to be a good choice."

She began riding in the Changchun suburbs in 2013, after her retirement from Jilin Police College. In May 2015, she started her first long-distance journey — a trip around Bohai Bay. It took her 24 days to complete the 2,655-kilometer route, and the success encouraged her to do more. 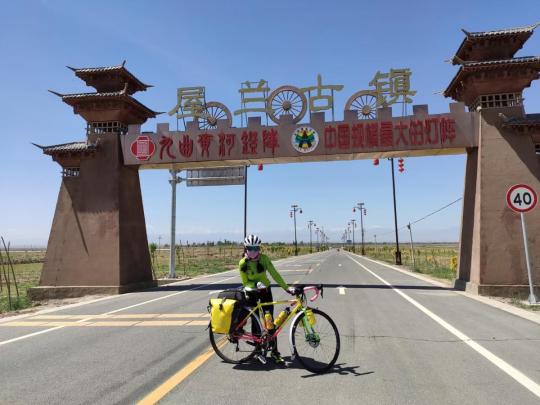 On the ancient Silk Road in June. [Photo provided to chinadaily.com.cn]

In recent years, she has finished several long-distance journeys across China, including a ride around Qinghai Lake in Qinghai province and other trips in Hainan province and Taiwan.

Together with several other cycling enthusiasts, Ben started the ancient Silk Road journey from Xi'an, Shaanxi province, on May 21. She crossed the cities of Lanzhou, Wuwei, Jiuquan, Dunhuang and Jiayuguan in Gansu province and finally arrived in Urumqi, Xinjiang Uygur autonomous region, on June 18.

"During the 3,000-km journey, I enjoyed the beautiful scenery and unique landscapes," she said. "However, I also encountered difficulties, such as storms and terrible road conditions."

"Fortunately, I persisted and finally reached my destination," she said. "I hope more people will take up cycling as their daily exercise. A bike is a low-carbon vehicle that can help promote a more friendly environment."