Family witnesses and benefits from changes in Tibet 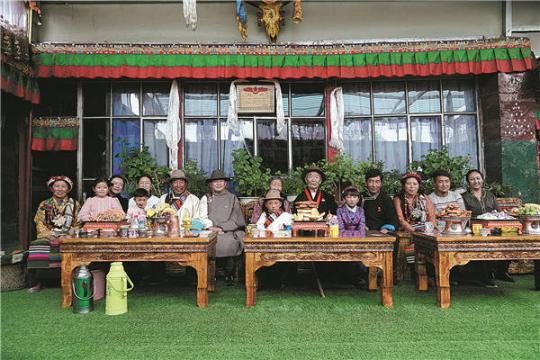 Yarlung Zangbo River, the longest plateau river in China and one of the highest rivers in the world, runs through the city of Shigatse in Southwest China's Tibet autonomous region. People living on the north bank have to cross the roaring river to reach the city's downtown area and beyond.

Phumtsog, 88, a villager from Dongkar town, and three generations of his offspring have different versions of stories of crossing the river, but are all witnesses of the great changes in Tibet－from backwardness to progress and from poverty to prosperity spanning seven decades.

Recalling the bitter days of the past, Phumtsog says that, "children were taken as serfs at a very young age when their baby teeth had just fallen out, and they had to work for their masters from dawn to dusk".

Phumtsog used to live a miserable life just like about 1 million serfs in old Tibet. Things began to change since the peaceful liberation of Tibet in 1951. One million serfs were liberated in 1959 when feudal serfdom was abolished through democratic reform.

In 1956, Phumtsog, who was in his 20s, managed to cross the Yarlung Zangbo River on a boat made of bull hide and joined the Chinese People's Liberation Army stationed in Shigatse. He received basic education in the army for the first time in his life. He also committed himself to ethnic unity and rendered help toward local production.

"I did not feel tired even after working around the clock, as the service was for the public, rather than for feudal masters," Phumtsog says. He joined the Communist Party of China in 1958.

Phumtsog's son Dawa Tsering inherited the tradition of river-crossing on a bull-hide boat. At the age of 8, Dawa Tsering began to go to primary school in a town on the other side of the river.

Reaching school was not easy for little Dawa Tsering, as he had to carry his boat and trek a dozen kilometers before getting to the river, while the fear of falling into the water always loomed large. He boarded at school and came home every three weeks.

In the old Tibet, over 90 percent of Tibetans struggled for subsistence, and up to 95 percent were illiterate. Today, hunger and poverty is a thing of the past for people of all ethnic groups in Tibet, and 15-year public-funded education is offered across the region.

The custom of riding boats across the Yarlung Zangbo River finally ended when a bridge was built in 2016 as part of the poverty eradication efforts in the village.

The river is no longer a barrier. Dawa Tsering says his 15-year-old daughter got to attend a junior high school in Jinan, capital of East China's Shandong province, thanks to an interprovincial exchange as part of a poverty alleviation initiative.

The memories of starting life from scratch are etched in Phumtsog's heart. "We need to work harder to live a better life," he says.

Looking into the future, the younger generations of this family have higher expectations. Pasang Norbu, Phumtsog's grandson, plans to learn about agricultural mechanization, which is burgeoning in their village, and make a foray into the potato planting industry.

Pasang Norbu pins more hope on his 10-year-old daughter Padma Saldron, the fourth generation of this Tibetan family. With convenient access to compulsory education, Padma Saldron is enrolled in a primary school that is located in their own town and it takes her just a few minutes to reach school by school bus.

"I hope she can cross the Yarlung Zangbo River and walk out of the mountains and realize her dream," says Pasang Norbu.

Phumtsog was awarded a CPC commemorative medal for his five decades of Party membership. "I have grown old too early," he says with a sigh of happiness.