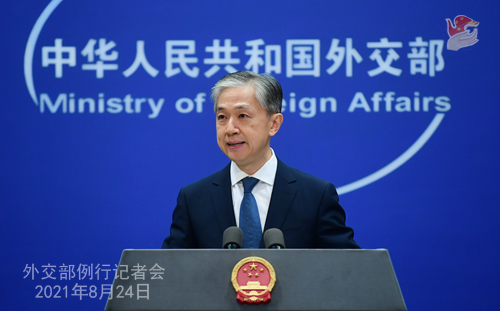 China is concerned the so-called United States intelligence report on coronavirus origins will contain predetermined conclusions and be unreliable, as it urged Washington on Tuesday to stop politicizing the scientific issue.

"Origin tracing requires science, not intelligence. It is anti-science in itself to trace the origins of the virus by using intelligence agencies," Foreign Ministry spokesman Wang Wenbin said at a regular news briefing.

It is unlikely that the so-called report by the U.S. intelligence community, which has a notorious record, will be based on facts and truth, and it is "nothing more than a setup to prove a predetermined conclusion with selective evidence", Wang said.

The White House said on Monday that it's likely an unclassified version of the U.S. intelligence community's review of whether the coronavirus pandemic originated in a lab in China could be released as soon as next week.

In May, U.S. President Joe Biden ordered a 90-day probe into the origins of the virus, even though the "Wuhan lab leak "notion had been dismissed by most scientists as a fringe conspiracy theory.

Tuesday is the deadline for the 90-day review to be completed.

Origin tracing requires unity, not framing others, Wang said. Its purpose is to protect the lives and health of people from all countries, he added, instead of blaming others and suppressing rivals to serve one's own self interests.

The U.S., out of ulterior political motives, has demanded its intelligence agencies conduct so-called investigations on the origins issue, which has undermined international cooperation and has been widely questioned and opposed by the international community, Wang said.

He urged the U.S. to get back on the right track of scientifically tracing the origins of the virus.

Washington's politicizing of anti-pandemic efforts has led to the U.S. having the highest number of infections and deaths in the world, and the people in the U.S. have paid a heavy price, Wang said.

He cited various U.S. reports that said the COVID-19 pandemic has multiple origins and broke out in multiple places, which require high attention and serious investigation.

The U.S. should stop blaming and smearing China and invite World Health Organization experts to conduct origin-tracing research in the country as soon as possible, he said.