Foreign military forces must be held accountable for violations of human rights in Afghanistan: diplomat 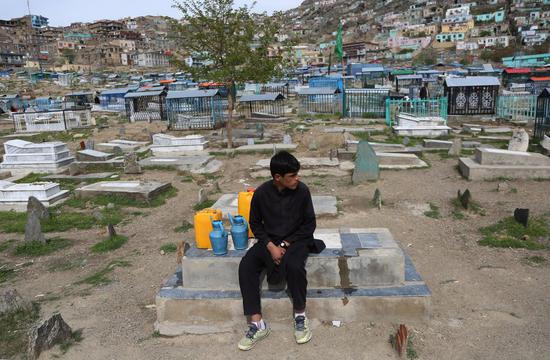 An Afghan boy sells water at a graveyard where a number of war victims have been buried in Kabul, Afghanistan, on April 16, 2021. Since entering Afghanistan in October 2001, the U.S. troops have caused more than 30,000 civilian deaths, injured more than 60,000 and made about 11 million people become refugees. (Photo by Rahmatullah Alizadah/Xinhua)

A Chinese envoy on Tuesday highlighted that military forces of the United States, the United Kingdom and Australia must be held accountable for their violations of human rights in Afghanistan, and the related UN resolution must cover this issue.

Speaking at the Special Session of the UN Human Rights Council on Afghanistan Tuesday morning, Chen Xu, Ambassador of China to UN at Geneva, stressed that power politics and military means lead nowhere, but only undermine regional security and stability and violate the human rights of local people.

"It must be pointed out that the United States and a few other countries, under the pretext of democracy and human rights, conducted military interventions in sovereign states, imposed their own models on countries with different history, culture, and national conditions," Chen said.

"Such acts have seriously undermined the sovereignty and territorial integrity of those countries and brought severe disasters to their people. This indeed is a profound lesson," he added.

The Chinese diplomat told the Council that China stands ready to continue to develop good-neighborliness and friendly cooperation with Afghanistan and play a constructive role in Afghanistan's peace and reconstruction.

"The situation in Afghanistan has undergone major changes. We respect the will and choice of the Afghan people," Chen said.

The top priority at this moment is to restore peace, stability and order in Afghanistan at an early date, Chen said, noting that the safety and interests of Afghan civilians and foreign nationals must be guaranteed.

"China encourages and hopes that the Afghan Taliban will follow through its positive statements, unite with all parties and ethnic groups in Afghanistan, establish an open and inclusive political framework that fits its national conditions and wins public support through dialogue and consultation with the least delay, and adopt moderate and prudent domestic and foreign policies," he said.

He also expressed hope that the Afghan Taliban will curb all kinds of terrorist and criminal acts, ensure a smooth transition of the situation in Afghanistan, and enable the war-torn Afghan people to leave war and turmoil and rebuild their homeland as soon as possible.