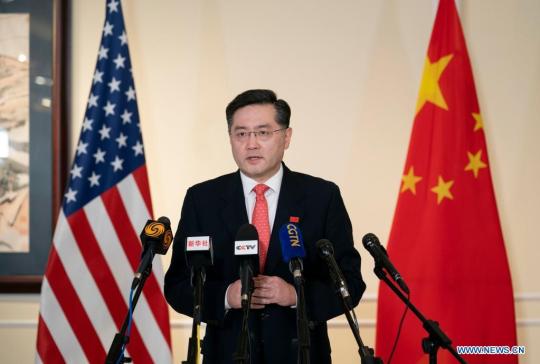 China's new Ambassador to the United States Qin Gang on Wednesday said he believes "the door of China-U.S. relations, which is already open, cannot be closed."

"This is the trend of the world, the call of the times, and the will of the people," said Qin in his remarks to Chinese and U.S. media upon arrival in the United States.

Fifty years ago, Dr. Henry Kissinger made a secret visit to China and opened the door to the normalization of China-U.S. relations, said Qin. "It was during the Cold War; at that time there was virtually no contact between the two countries. Dr. Kissinger had to travel covertly to China via a third country."

"Fifty years later today, as the 11th Chinese Ambassador to the United States, I can travel most openly and fly directly to this country. How the world has changed with the passage of time," Qin said.

Over the past half a century, the China-U.S. relationship has kept moving forward despite twists and turns, he said, noting, "It has not only had a profound impact on the two countries, but has also changed the course of history and the world significantly. The world today is going through major changes unseen in a century."

The China-U.S. relationship "has once again come to a new critical juncture, facing not only many difficulties and challenges but also great opportunities and potentials," he said.

"As two big countries different in history, culture, social system and development stage, China and the United States are entering a new round of mutual exploration, understanding and adaptation, trying to find a way to get along with each other in the new era," said Qin.

"Where this important relationship will be headed is vital for the well-being of the Chinese and American peoples and for the future of the world. The two peoples and the international community hope for a sound, stable and growing relationship between the two countries," he said.

"The world's correct path is vicissitudes. As President Xi Jinping put it, we need to forge new paths and build new bridges whenever necessary to take us past all risks and challenges. President Joe Biden said that anything is possible," he continued.

The ambassador said he will follow through on the spirit of the phone call between the two presidents on the eve of the Chinese New Year, and seek to build bridges of communication and cooperation with all sectors of the United States.

"I look forward to working closely with them to safeguard the foundation of China-U.S. relations, uphold the shared interests of the two peoples, and endeavor to bring China-U.S. relations back on track, turning the way for the two countries to get along with each other -- mutual respect, equality, win-win cooperation and peaceful coexistence -- from a possibility into a reality," he said.

Prior to his ambassadorship, Qin served as Chinese vice foreign minister. His predecessor, Ambassador Cui Tiankai, completed his tenure and returned to China on June 23.