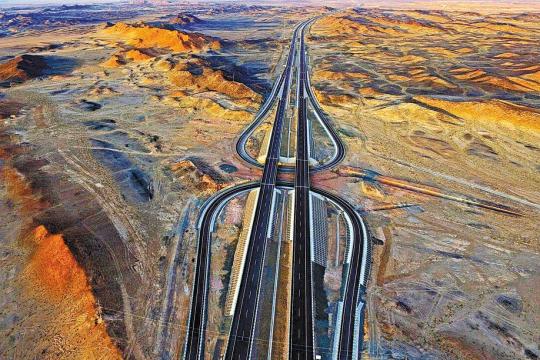 The overall length of expressways in the Xinjiang Uygur autonomous region has exceeded 6,000 kilometers, according to the region's transport authority.

"The construction of expressways has been speeded up in our region this year. With some of the projects being completed, the expressways in Xinjiang have topped 6,000 km in length, forming a more convenient transportation network that allows people to travel across the region efficiently," said Sun Xiankui, an official with Xinjiang's transportation department.

The last section of the 2,822-km Beijing-Xinjiang Expressway－or the G7 national road network－opened to traffic on June 30. The route runs from Beijing, the provinces of Hebei, Shanxi and Gansu and the Inner Mongolia autonomous region to Xinjiang.

The expressway, winding through a variety of landscapes, such as mountains, the Gobi Desert, grassland and wetland, cuts the driving distance between Urumqi and Beijing by 1,300 km.

It also reveals some of the natural splendors in Xinjiang's remote areas to a larger group of tourists.

For example, as the first expressway linking Yiwu county in Xinjiang's Hami prefecture to other parts of the country, it is expected to fuel the county's tourism sector.

Ren Zihua, president of a culture and tourism company that manages the popular scenic areas in Yiwu, said the G7 route's opening will promote the county's scenic areas, enabling tourists from across the country to come and appreciate breathtaking sites at places such the Tianshan Mountains. The company plans to sign agreements with travel agencies in Beijing this month to further promote such areas.

The 1,931-km Turpan-Hotan Expressway, which passes through Turpan, Bayingolin Mongol autonomous prefecture and Aksu, Kashgar and Hotan prefectures, is currently the longest expressway in Xinjiang. It has been contributing to the development of multiple industries in southern Xinjiang as well as helping local people boost their incomes.

Salamat Idris, a villager in Pishan county, Hotan, works at an edible fungi cultivation zone situated near the Turpan-Hotan Expressway.

The mushrooms she packs in the workshop are delivered to outlets across the country through the expressway, which is part of the national G30 network. "The cold-chain logistics and the expressway networks ensure the freshness of the mushrooms when they arrive at the outlets," she said.

Mamat Iminjan, a melon grower in Aksu prefecture's Awat county, said that traders seldom drove to visit his orchard in the past due to poor road conditions.

"After the road was paved, traders would come to buy and ship my sweet melons one after another during the harvest season every year," he added.

Meanwhile, the expressway that connects Ruoqiang county in Bayingolin with Minfeng county in Hotan－an important section of a loop expressway circling the Tarim Basin－is under construction and is expected to open by the end of this year.