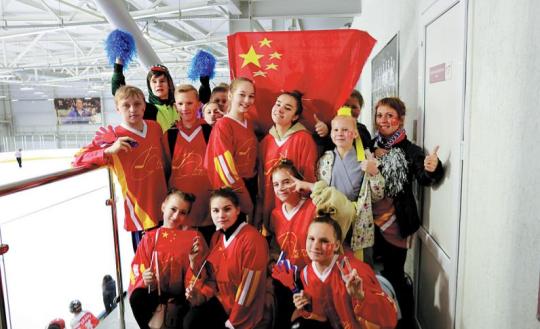 Russian fans of the Kunlun Red Star youth hockey team hold Chinese national flags at the EuroChem Cup tournament in the city of Novomoskovsk in May 2019. REN QI/CHINA DAILY

Talks held at the end of last month by President Xi Jinping and his Russian counterpart Vladimir Putin to jointly announce the extension of a key treaty between the two countries have drawn supportive comments from Russian media and experts.

The discussions, held via video link on June 28, marked the extension of the China-Russia Treaty of Good-Neighborliness and Friendly Cooperation, which will expire in February.

The treaty, signed by then-Chinese president Jiang Zemin and Putin on July 16, 2001, outlines the fundamentals that serve as a basis for peaceful relations, economic cooperation and diplomatic and geopolitical ties.

It also encompasses a mutual, cooperative approach to environmental technology regulations and energy conservation, as well as international finance and trade.

Hailing the 20th anniversary of the treaty, Xi told Putin the agreement established the idea of enduring friendship, which conforms to the fundamental interests of the two countries as well as the themes of peace and development.

The treaty is a vivid example of fostering a new type of international relations and building a community with a shared future for mankind, Xi said.

Russian newspaper Izvestia quoted Putin as saying that under the China-Russia comprehensive strategic partnership of coordination for a new era, the treaty enshrines principal agreements. These include mutual support for protecting national unity and territorial integrity, refusing to use nuclear weapons first, and refusing to direct strategic missiles in each other's direction.

Alexei Mukhin, director-general of the Center for Political Information, a Russian think tank, said that for the public, the talks between the two leaders demonstrated that even during difficult times, Russia and China have managed to maintain a balanced relationship.

"Russia and China have a long history of good relations. It is obvious that we (Russia) have much more in common with China now than with our Western partners," he said.

Sergei Luzyanin, a professor at the Moscow State Institute of International Relations, said the treaty is by no means static, but has evolved and been extended to meet emerging challenges and threats.

"The treaty is very necessary and important for both sides. It looks to the future and ensures strategic stability and security for our countries in this complex world," he said.

Yevgeny Zaitsev, head of the Center for Russian-Chinese Studies at Lomonosov Moscow State University, said the treaty has contributed to global development and remains relevant.

"All the main provisions laid down in the treaty have fully retained their relevance and positive effect not only for Russian-Chinese relations but also for the world community as a whole," Zaitsev said.

Izvestia said cooperation between the two countries plays a stabilizing role on the international stage, especially amid geopolitical turbulence and rising tensions in different parts of the world, including the Korean Peninsula, Syria and Afghanistan.

Li Ziguo, director of the Department of European-Central Asian Studies at the China Institute of International Studies, said: "On the basis of the treaty, China-Russia relations have developed rapidly in various fields, covering politics, the economy and culture, over the past 20 years. The relationship between the two countries has also been upgraded to a comprehensive strategic partnership of coordination for a new era.

"The secret to the strong development of bilateral ties lies in upholding the principles of mutual respect, equality, mutual benefit and win-win cooperation, and not targeting any third party. Practical cooperation also provides a strong impetus for the development of ties."

Andrey Karneev, professor and head of the School of Asian Studies at Russia's Higher School of Economics, said the treaty has fostered deeper Russian-Chinese cooperation on a wide range of international, bilateral and regional issues.

"Relations have come a long way in these 20 years," Karneev said, adding that the partnership was initially based on a "certain outline" for cooperation and subsequently reached "a mature state".

"Figures showing trade and economic interaction reflect this, and also the figures for bilateral exchanges. This is largely due to the role of this treaty," he added.

Vyacheslav Volodin, speaker of the Russian State Duma, the lower house of parliament, said Russia-China ties are fundamental to maintaining global stability and tackling international challenges through an approach that takes into account the interests of both countries.

He added that the partnership between the two nations demonstrates how relations are built on honesty and appreciation of both sides' national interests and development.

Vladimir Portyakov, deputy director of the Institute of Far Eastern Studies at the Russian Academy of Sciences, said Russia and China, along with the United States, are the three powers considered to be at the center of world politics, representing the nucleus of the entire system of international relations. In view of this, it is only natural that long-term agreements between two of the three main players serve to play an important role.

"The treaty has been in force for 20 years. It was signed at a time when there was no total confidence in the favorable development of bilateral relations, and when the level of political trust left a lot to be desired.