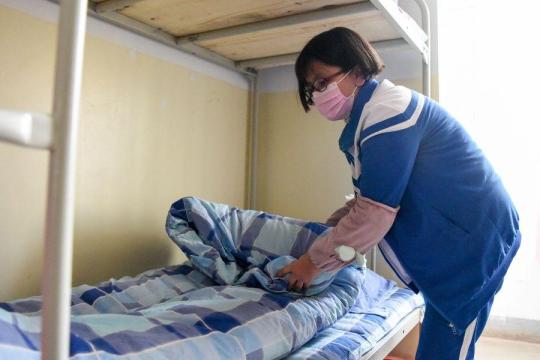 A junior three grader makes the bed at the dormitory of the No. 8 Middle School in Kashgar prefecture, Northwest China's Xinjiang Uygur autonomous region, March 15, 2020. [Photo/Xinhua]

People from the Aksu, Kashgar and Hotan prefectures and other places in the Xinjiang Uygur autonomous region debunked claims alleging "forced boarding" of ethnic minority students as they shared their personal experiences with local education authorities at a news conference on Sunday.

Mihrigul Mamtimin, a teacher at a primary school in Weili county of Xinjiang's Bayingol Mongolian autonomous prefecture, serves as a dorm parent. She supervises students living in the residence hall and provides them with a favorable environment for healthy growth and successful study.

She said the boarding school offers free student accommodations and food. Tutors guide boarders in each class and answer their questions after class.

Students from Han, Uygur, Hui and other ethnic groups study and play together, helping their classmates improve their study habits and life skills.

"The boarding school helps students develop good habits. It has received positive feedback from the students and their parents," Mihrigul Mamtimin said, noting that some anti-China elements in foreign countries have fabricated lies about "forced boarding" of students in Xinjiang, which she called "outrageous".

"Students can decide for themselves whether to be a boarder or not, and boarders return home after school every Friday to spend the weekend with their parents," she said. "There is no such thing as forced boarding."