China's annual growth forecast to be above 8%: Paper 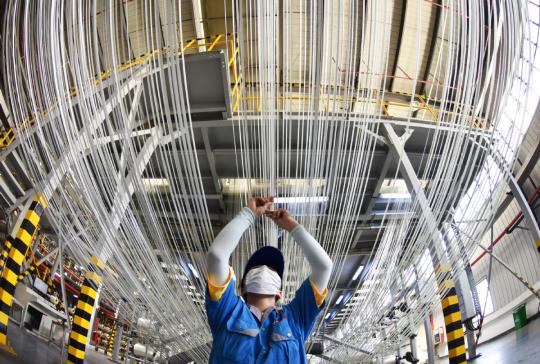 A worker checks the operation of a carbon fiber production line at a factory in Lianyungang, Jiangsu province. (Photo by Geng Yuhe/For China Daily)

As the country's economic activity continues to normalize and the economic recovery expands, the World Bank predicted China's economic growth is expected to reach 8.5 percent on a yearly basis in 2021, instead of the 8.1 percent previously.

Moreover, the global economy will expand by 5.6 percent this year, and the figure in the US and the Eurozone will be 6.8 percent and 4.2 percent, respectively, according to the World Bank.

Thanks to China's robust growth, the East Asia and the Pacific regions' economic recovery will be strongest this year, and the country will contribute more than a quarter to global economic growth, the World Bank said.

Although the growth momentum will weaken in the second half of this year, Citigroup raised its full-year forecasts to exports, industrial production and real estate investment, Liu added.

As countries gradually reopen, the global economy will accelerate in the coming months, which will drive a recovery in income growth and re-hiring, Credit Suisse said.

Credit Suisse also predicted the global economy is expected to grow 5.9 percent this year, with China surging 8.2 percent, the US 6.9 percent and the Eurozone 4.2 percent

Ding Shuang, chief economist for Greater China and North Asia at Standard Chartered Plc in Hong Kong, said the main problem in the country is the service sector, which has not reached the pre-epidemic growth rate.

21st Century Business Herald cited the institutes as saying that China's CPI will be moderate throughout the year, and the indicator will not exceed the government's 3 percent target.

The pressure of renminbi depreciation will increase in the second half of this year, but the trend will continue to fluctuate in both directions, the institutes said. Moreover the US dollar index is rising and the Federal Reserve has tightened its policies ahead of schedule, which also will put depreciation pressure on the renminbi.

The renminbi will not continue to appreciate in the short term, with the exchange rate of the yuan against the US dollar expected to be between 6.4 and 6.6 in the second half of this year, Ding said,

Supported by China's economic fundamentals, the renminbi will remain a relatively strong currency for a long period of time, Ding added.