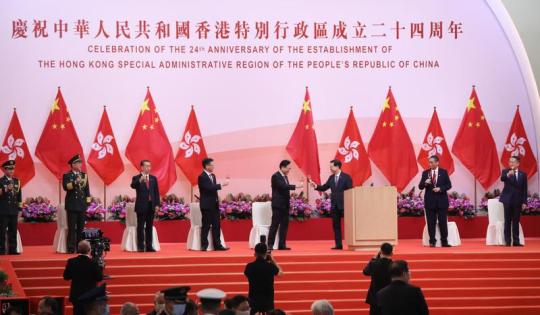 Acting Chief Executive of the Hong Kong Special Administrative Region John Lee Ka-chiu (third right) attends the celebration of the 24th Anniversary of the establishment of the HKSAR of the People's Republic of China, at the grand hall of Hong Kong Convention and Exhibition Centre on July 1, 2021. [Photo by CALVIN NG / CHINA DAILY]

Acting Chief Executive of the Hong Kong Special Administrative Region John Lee Ka-chiu on Thursday said the HKSAR governing team is more confident than ever in city's future, with the National Security Law for Hong Kong and an improved electoral system in place.

Addressing the reception in celebration of the 24th anniversary of the establishment of the HKSAR, Lee said that, over the past 24 years since the city returned to the motherland, the central government has firmly upheld the "one country, two systems" principle and helped the city take care of its long-standing systemic loopholes by adopting the national security law for Hong Kong and improving its electoral system.

This year, July 1 also marks the 100th anniversary of the founding of the Communist Party of China.

Lee said the implementation of the "one country, two systems" principle is an important chapter of the CPC's great achievements over the past one hundred years.

"One country, two systems" is the optimal mechanism and a solemn undertaking to maintain Hong Kong's long-term stability and prosperity, Lee said.

In the future, the SAR government will forge ahead and continue to firmly safeguard national security with the implementation of "one country, two systems", Lee pledged.

The nation has provided many opportunities for Hong Kong and now, with the improved electoral system, Hong Kong can concentrate on development, Lee said.

He also appealed to the people of Hong Kong to get vaccinated as soon as possible so that Hong Kong's economy can rebound quickly, with the pandemic under control and stability restored.

The reception was held after a national flag-raising ceremony. Helicopters flew over Victoria Harbour, displaying the national and regional flags.