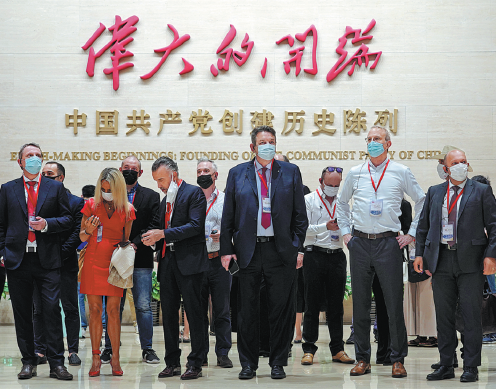 Foreigners visit the Memorial for the Site of the First National Congress of the Communist Party of China in Shanghai, on Monday. (CHINA DAILY/GAO ERQIANG)

Twenty expatriates who work in Shanghai were given a tour of the memorial hall that commemorates the site of the First National Congress of the Communist Party of China on Monday.

The new memorial hall was officially opened to the public on June 3 to mark the 100th anniversary of the founding of the Communist Party of China, which falls on July 1.

The 20 foreigners were taking part in the Shanghai Through Our Eyes video series, which comprises 100 short videos produced by Xinmin Evening News to mark the centenary. The videos share the thoughts that 100 foreign residents of Shanghai have about the city.

Located in the bustling Xintiandi area in downtown Shanghai, the memorial hall is located near the original site of the first CPC National Congress. The venue features an oath-taking hall and a sprawling exhibition area of more than 3,000 square meters that showcases over 1,000 items related to Party history.

The expatriates were impressed by the tour, with some of them praising the use of multimedia content and high-tech devices such as holographic projections and 3D displays to enhance the viewing experience.

"I'm from the art industry, so I always believe that visuals help a lot with telling a story. I think this exhibition is quite different from the usual ones because it has many visuals, which makes the Party history easier to understand," said Astrid Poghosyan, an Armenian violinist and a management staff member at the Shanghai Symphony Orchestra.

"I especially liked the short movie we got to watch. It made it really easy for visitors to understand the things that have happened in history compared with just using text and pictures."

After the tour, the group gathered for a two-hour roundtable session where they shared their thoughts on the development of China and Shanghai in recent decades. While most of them spoke English, some took the opportunity to show off their Chinese-language fluency.

Among those who expressed admiration for China's rapid development was Diego Benedetto, an Italian who works for China Eastern Airlines.

"I admire the way China has been managed in the last few decades. I first visited China in 1984 and returned to this country 10 years later and saw how much it had developed. Today, I live in China and I can say that this is akin to living in the future," Benedetto said.

"Every day, I see evidence of the successful management of China. Just yesterday, I was in Chengdu to celebrate the development of a poor area that has been lifted out of poverty. I flew the first flight from the new Chengdu Tianfu International Airport to Shanghai. This giant new airport is another indication of the success China has achieved.… I love Shanghai because it best represents the development of China－quick and incredible," he added.