Locals learn to live with elephants 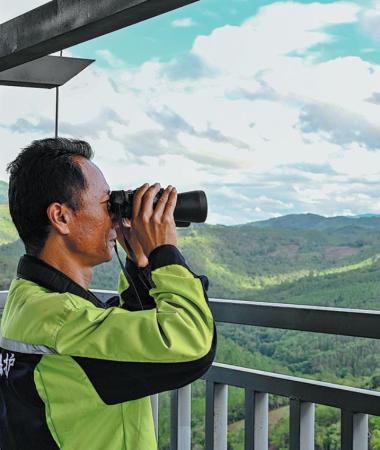 Zhou Zhitao has lost count of the number of times he has encountered wild Asian elephants in the past decade during his work with the forestry authority in Pu'er, Yunnan province.

He once pushed aside a leaf on a banana tree as he made his way through jungle, only to find a herd of roaming elephants just a few dozen meters away. He managed to flee to safety after jumping off a slope, which left him covered in scratches.

Zhou, who heads the authority's wild animal and wetland protection department, advised anyone encountering wild elephants to flee in the hope of finding a gully to jump into, as he has done several times. "The deeper the gully, the better," he added.

A herd of roaming elephants has been making headlines in China and overseas after unexpectedly trekking more than 500 kilometers north from its traditional habitat in Xishuangbanna National Nature Reserve, Yunnan.

Officials in areas where elephants have never appeared in recent times have suddenly found themselves having to monitor the animals in an attempt to avoid casualties.

With elephant herds in general now roaming further north, Zhou is among those working at the forefront of the country's ongoing efforts to ensure the harmonious coexistence of the animals and humans.

From initially feeling scared, to considering the elephants as regular visitors that arrive to escape the summer heat, many people in Pu'er have become increasingly accustomed to life with the animals, which can weigh as much as 5 metric tons.

However, the elephants are now roaming in areas where people have limited knowledge of them, posing challenges for local authorities in avoiding conflicts between the animals and locals.

Since a lone elephant entered Pu'er in 1992, the giant mammals have continued to arrive, according to the city's forestry authority.

Monitoring by the authority shows that 181 wild Asian elephants, or nearly 62 percent of the country's total, roam in areas of Pu'er that are home to more than 470,000 people.

Listed as endangered on the International Union for Conservation of Nature's Red List of Threatened Species, Asian elephants are under Class-A State protection in China. Thanks to joint protection efforts, the number of these animals in the wild in China has reached about 300, up from around 170 in the 1970s.

Zhou said the elephants have kept him busy since he joined the authority in 2009. "In the busiest times, I didn't go home for about two weeks," he said.

Majoring in computer science, he knew little about the animals when he started working with the authority. However, Zhou quickly learned from experience.

He said a male elephant that is driven away from a herd is usually the most dangerous animal, adding that it is also highly risky to approach a herd that has calves.

Zhou said it doesn't necessarily mean that elephants intend to hurt people if they charge at them, as sometimes the animals just want to play, but he added that as they are so strong, they can easily cause casualties.

"We certainly need to protect them, but we also need to take precautions against them," Zhou said.

There is no "one-size-fits-all "approach to monitoring elephant herds, because their temperaments vary greatly, he added.

For example, some herds seldom change their migration routes and usually appear in locations at a certain time. There is no need to watch such herds that closely, he said.