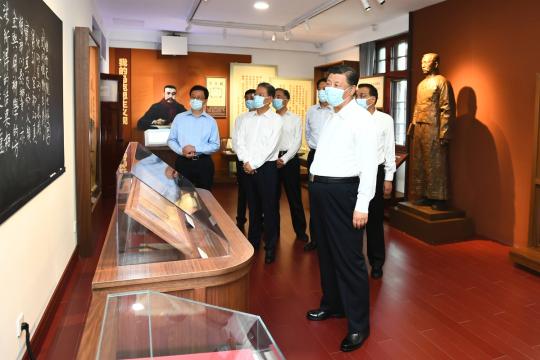 Xi Jinping, general secretary of the Communist Party of China Central Committee, has called for using the Party's history of struggle, its great achievements, glorious tradition and fine work style as the sources of the spiritual driving force for all Party members to make new achievements in the new era.

Xi made the remark on Friday as he presided over a group study session of the Political Bureau of the CPC Central Committee, ahead of the July 1 centenary of the CPC's founding.

As part of the study session, Xi led the Political Bureau members on a visit to the "Red Building" in Beijing, once the main campus of Peking University, where an exhibition was held in commemoration of the history of how the CPC was founded. It was in the four-story red brick building that China's advanced youth, including Mao Zedong, developed the Marxist ideas that paved the way for the establishment of the CPC.

Xi also led a visit to a former residence of Mao in the Zhongnanhai leadership compound. The late chairman worked and lived there for 17 years from 1949, when the People's Republic of China was founded.

The two sites are of landmark significance in the Party's history, and they have vividly explained how the CPC and the PRC developed, Xi said during the visit.

He stressed that sites and heritage related to the CPC's history are scattered all over China, representing the Party's glorious history and great achievements and its pursuits, sentiments, responsibilities, sacrifices and dedication.

Xi said that since the 18th CPC National Congress in 2012, he has visited almost all major sacred revolutionary sites and memorials related to revolutionary history during his inspection tours nationwide.

He urged efforts to safeguard the country established by the revolutionary martyrs and develop it well, calling for new achievements that can live up to the expectations of the revolutionary forefathers, stand the test of time and are worthy of the people.

He underlined the importance of Marxism in guiding the Party in its centennial development, saying the reason why the CPC can get things done and why socialism with Chinese characteristics is so good is fundamentally because Marxism really works.

The wide spread of Marxism in China gave birth to the CPC, and it provided the Party with a scientific worldview and methodology, as well as a powerful ideological weapon to understand and transform the world, he said, urging efforts to educate the whole Party to consistently follow the guidance offered by the scientific theories.

Xi called on all Party members and officials to firm up their ideals and beliefs and overcome difficulties to secure new victories on the new journey of fully building a modern socialist country.

Currently, China is in a crucial period of realizing the rejuvenation of the Chinese nation, and the revolutionary spirit must not be abandoned, Xi said, nor can the Party give up modesty, prudence, and its other traditions such as working hard, showing diligence and thrift, and guarding against arrogance and impetuosity.

The Party must maintain its courage, fearing no enemies or risks and daring to fight and win, he added.

Xi demanded the Party to stick to self-reform, which provides strong support for the Party's governance capacity. He urged efforts to advance the full and strict governance over the Party.

Xi also called for sound protection, management and utilization of sites and heritage related to the CPC's history. Historical nihilism should be opposed and resisted, he said.

He said the sites and heritage should be used to guide young people to foster ideals that carry forward the revolutionary traditions.