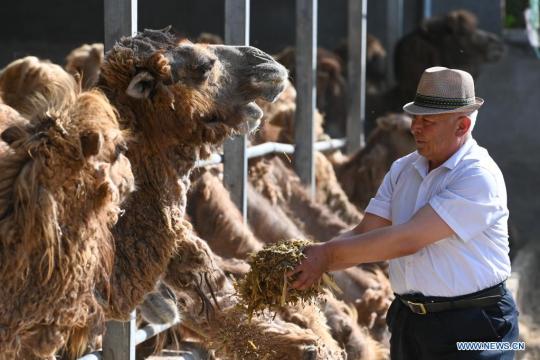 A man feeds camels at an organic cultivation base of a dairy company in Yining county in Kazak autonomous prefecture of Ili, Northwest China's Xinjiang Uygur autonomous region, May 27, 2021. (Photo/Xinhua)

China welcomes Ukraine's independent decision to withdraw its endorsement of an anti-China joint statement at the 47th session of the United Nations Human Rights Council, the Foreign Ministry has said.

Ukraine issued a statement on Friday on the website of its Permanent Mission to the UN Office at Geneva in which it withdrew its signature from a joint statement led by Canada on the human rights situation in China's Xinjiang Uygur autonomous region.

Ukraine's move reflects its spirit of respect for facts and conforms to the purposes of the UN Charter and basic norms governing international relations, a spokesperson for the Foreign Ministry said in a statement on Saturday.

Ukraine's Ministry of Foreign Affairs also issued a statement on Thursday, saying that it values its strategic partnership with China and it does not interfere in China's internal affairs.

Ukraine is willing to continue to uphold the principles of mutual respect for independence, sovereignty and territorial integrity, and to push forward bilateral relations, the statement said.

The attempt of a few Western countries to smear China on issues related to Xinjiang, Hong Kong and Tibet had ended in failure again, the Foreign Ministry spokesperson's statement read.

This fully demonstrated that justice will always prevail and people have their fair judgment, the spokesperson said, adding that the moves of a few Western countries to interfere in China's internal affairs, suppress and contain China and hinder China's development under the pretext of human rights are unavailing.

More than 90 countries at the UNHRC session supported and echoed China in various ways, the spokesperson said.

Prior to the Canadian-led statement, Belarus delivered a joint statement on behalf of 65 countries, saying that they oppose the politicization of human rights as well as politically motivated, unfounded allegations against China.

Six members of the Gulf Cooperation Council have collectively sent a letter supporting China's stance, and more than 20 countries are ready to make separate speeches in support of China.