China made public on Sunday several video clips captured by the country's Tianwen 1 Mars mission, including one with an audio recording that is the first to be released from this historic interplanetary expedition.

The clips, released by the China National Space Administration, recorded the processes of the Mars touchdown by Tianwen 1's landing capsule, the Zhurong rover's departure from the capsule, and its movement on the Red Planet's soil. They also provide the first opportunity for people around the world to see a rover in motion on the surface of Mars.

The ambient sound during the process of Zhurong's rolling onto the Martian surface was also recorded and published, enabling people to hear the first sounds transmitted from the Chinese robot, which is now about 360 million kilometers away from Earth.

The administration also made public two pictures taken by Zhurong that show the surrounding environment and tracks left by its wheels.

Pang Zhihao, a retired spaceflight researcher at the China Academy of Space Technology, said that the sounds from Mars have considerable scientific value.

"Through analyses of them, scientists will be able to investigate environmental factors on Mars at that time, such as the weather and wind speed, thus advancing their understanding of the planet," he said, adding that all previous sounds from Mars were recorded by United States' landers and rovers. 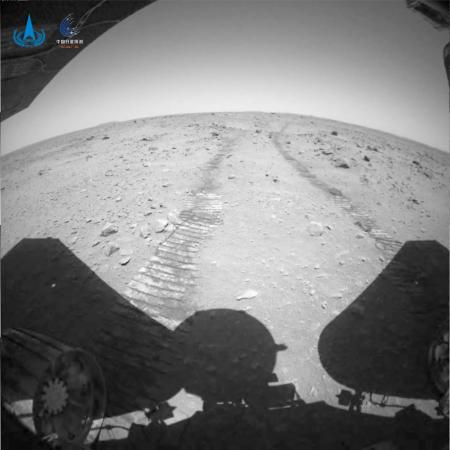 A picture shows tracks left by the wheels Zhurong, the Mars rover on the Red Planet. (Photo provided to chinadaily.com.cn)

"Sending videos and photos back to Earth is never an easy job because it challenges the technology and capability of a Mars mission," Pang said.

As of Sunday morning, Zhurong, named after the Chinese god of fire in ancient mythology, had operated 43 days on Mars and traveled 236 meters to survey the barren planet. Meanwhile, the mission's orbiter has continued traveling around the Red Planet for orbital exploration, according to a statement from the administration.

With an expected life span of three months, the 240-kilogram Zhurong is tasked with surveying Mars' landforms, geological structures, soil characteristics, potential locations of water and ice, and atmospheric and environmental characteristics, as well as magnetic and gravitational fields and other physical properties.

The 1.85-meter-high rover is the core component of the Tianwen 1 mission, the country's first interplanetary adventure, and also is the sixth rover on the Red Planet, following five from the United States.

The rover's six wheels, powered by four solar panels, allow it to move at a maximum speed of 200 meters per hour on the Martian surface. But the robot will not actually travel that fast, as it needs to detect and avoid obstacles along the route and will pause for scientific operations.

Tianwen 1, named after an ancient Chinese poem, was launched by a Long March 5 heavy-lift carrier rocket on July 23 from the Wenchang Space Launch Center in Hainan province, beginning the nation's first mission to another planet.

The spacecraft traveled more than 470 million km and carried out several trajectory maneuvers before entering the orbit of Mars on Feb 10. Zhurong landed on Mars on May 15.

A picture captured by the Tianwen 1 Mars mission shows the surrounding environment of the Red Planet. (Photo provided by China National Space Administration)