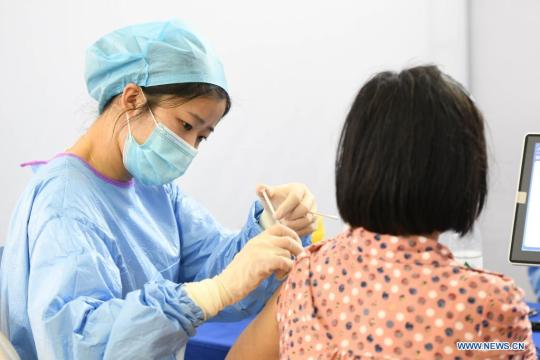 A woman receives a dose of COVID-19 vaccine at a vaccination site in Shushan district of Hefei, East China's Anhui province, May 15, 2021. (Photo/Xinhua)

China's inactivated vaccines against COVID-19 are exceptionally agile at tackling emerging variants and domestic vaccine manufacturers are fully prepared to update their shots, health experts and drugmakers have said.

Shao Yiming, a researcher at the Chinese Center for Disease Control and Prevention, said inactivated vaccines, which deliver a weakened form of virus to stimulate immune responses, are highly suitable for coping with new strains of the virus because most of the manufacturing process does not need to be changed.

"We only need to replace the existing strain found in earlier virus transmission with a mutated strain deemed as a new threat to us," he said.

"The next production cycle will make new doses targeting the variant, so the public does not need to worry," Shao added.

Feng Duojia, president of the China Association of Vaccines, said the method of changing the composition of the vaccines is straightforward and convenient.

"Because the manufacturing technology and production line remain the same, there is usually no need for the end product to go through the same rigorous testing and approval processes as the first-generation vaccines," he said.

Viruses mutate constantly. Though most viral mutations are insignificant, some changes occurring in the genetic material of a virus are likely to accelerate transmission or increase the risk of severe infection, according to the World Health Organization.

In a statement issued on March 1, the WHO said existing vaccines are expected to "provide at least some protection against new virus variants", and in the event of diminishing efficacy, "it will be possible to change the composition of the vaccines to protect against these variants".

The WHO has so far identified four variants that are potentially very dangerous. One of them, the B.1.617.2, or Delta variant, was first reported in India in October. It is believed to be linked to an ongoing outbreak in Guangdong province, southern China, Feng Zijian, a researcher at the China CDC, said at a news conference on May 31.

Shao, from the China CDC, said earlier that available data shows domestic inactivated vaccines can still provoke immunity against all significant strains under close watch, with their efficacy remaining above 50 percent.

During a recent outbreak in Guangzhou, "the ratio of severe cases among the unvaccinated group was markedly higher than that among people who had received vaccines", said Feng from the China CDC.

China has approved three inactivated vaccines for public use, two developed by State-owned Sinopharm and one by Sinovac Biotech.

Zhang Yuntao, vice-president of Sinopharm's China National Biotec Group, said that the company's vaccines can provide "a broader spectrum of protection "and are "more resilient" in fighting variants.

Both vaccines from Sinopharm use strains collected from patients infected during the outbreak last year in Wuhan, Hubei province, according to the company.

"Meanwhile, we are fully prepared to cope with acute threats of major virus mutations," he said. New variant-resistant vaccines can be used in combination with other types of vaccines, a method known as sequential immunization, or can be designed and delivered as multivalent vaccines, which means that they can fend off more than one strain with one shot, according to Zhang.

"We have established a good supervision and approval mechanism based on our experience, and the process of vaccine development and monitoring has become smoother, so we believe the creation of new vaccines will be timely and can meet the demands of the public," Zhang said.

In an interview with China Central Television, Yin Weidong, chairman of Sinovac Biotech, said that it will take a much shorter time for the company to create a vaccine targeting a variant as the company's research capabilities and production capacity have improved markedly.

The next challenge is to monitor and determine which strain will likely become the most common one worldwide, an unnamed infectious disease expert told National Business Daily.

"So far, none of the four variants of concern identified by the WHO has become the dominant strain amid the pandemic," the expert was quoted as saying.

Zhang Wenhong, head of the Shanghai team of experts on the treatment of COVID-19 patients, said mass vaccination is the best and only way to limit the ability of variants to arise.

"Virus mutations only occur when they are circulating widely," he said.